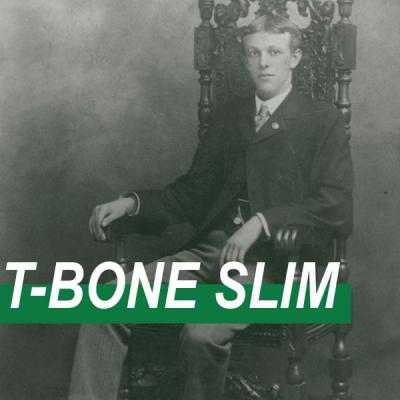 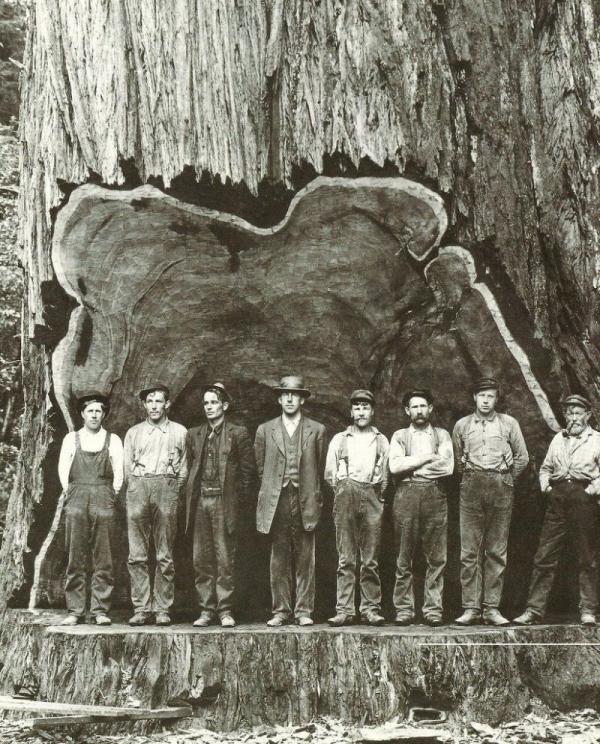 Lumberjacks often worked twelve hours a day, seven days a week, faced incredible dangers on the job, and lived under horrendous conditions. They were one of the most abused groups of workers in the early 20th century. The Industrial Workers of the World (IWW) was the only labor organization to pay any attention to workers in the lumber camps of the South and the Pacific Northwest. Although humorous in tone, the poem “The Lumberjack’s Prayer” captured the grueling conditions that most lumbermen faced on and off the job. “The Lumberjack’s Prayer” was written by T-Bone Slim and circulated on small colored cards that the IWW (also known as the “Wobblies”) sold to raise money. T-Bone Slim (born Matt Valentine Huhta) was a popular Wobbly writer. The nickname “Slim” was often used by hoboes, perhaps because they tended to be skinny from lack of food. In Wobbly publications, Christ was sometimes called “Jerusalem Slim.”
(History Matters) 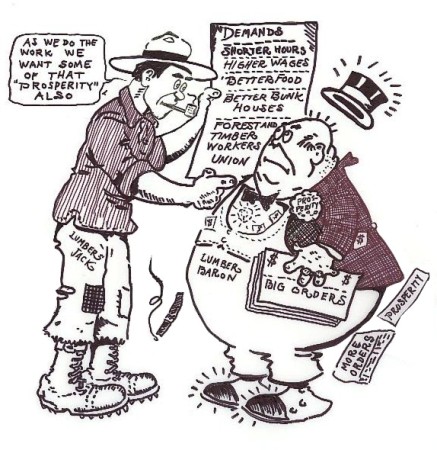 I am happy to say this prayer has been answered—by the “old man” himself. He tells me He has furnished—plenty for all—and that if I am not getting mine it’s because I am not organized SUFFICIENTLY strong to force the master to loosen up.
He tells me he has no knowledge on Dogs, Pressed-Beef Butts, etc., and that they probably are products of the Devil. He further informs me the Capitalists are children of Hisn—and that He absolutely refuses to participate in any children’s squabbles. He believes in letting us fight it out along the lines of Industrial Unionism.
Yours in faith,
T-BONE SLIM.
I pray dear Lord for Jesus' sake,
Give us this day a T-Bone Steak,
Hallowed be thy Holy name,
But don’t forget to send the same.

Oh, hear my humble cry, Oh Lord,
And send us down some decent board,
Brown gravy and some German fried,
With sliced tomatoes on the side.

Observe me on my bended legs,
I’m asking you for Ham and Eggs,
And if thou havest custard pies,
I like, dear Lord, the largest size.

Oh, hear my cry, All Mighty Host,
I quite forgot the Quail on Toast,
Let your kindly heart be stirred,
And stuff some oysters in that bird.

Dear Lord, we know your Holy wish,
On Friday we must have a fish,
Our flesh is weak and spirit stale,
You better make that fish a whale.

Oh, hear me Lord, remove these “Dogs,”
These sausages of powder’d logs,
Your bull beef hash and bearded Snouts.
Take them to hell or thereabouts.

With Alum bread and Pressed-Beef butts,
Dear Lord you damn near ruin’d my guts,
Your white-wash milk and Oleorine,
I wish to Christ I’d never seen.

Oh, hear me Lord, I am praying still,
But if you won’t, our union will,
Put pork chops on the bill of fare,
And starve no workers anywhere.