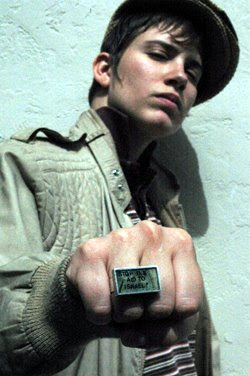 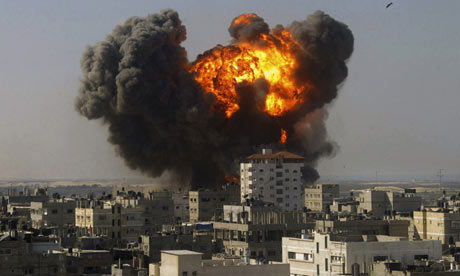 An Israeli air strike on Rafah, in the southern Gaza Strip, during the January 2009 conflict.
In January 2009, Israel launched an assault on the Gaza Strip, causing massive damage to civilian infrastructure, killing more than 1,300 Palestinians and wounding 5,300. Israel has held Gaza under siege, controlling the borders, air and water space, preventing even the most basic humanitarian goods from entering.

The Emperors Clothes is a call to action. One of the most effective strategies we can pursue right now is boycott, divestment and sanctions (BDS) campaigns against Israel, as we demand an end to Israel's 60-plus years of occupation and war on Palestinian life.
First they hit with phase one
Air strikes, all day and all night
Phase two, rockets hit the Gaza Strip with phosphorus
Phase three, ground attack
How we gonna counter-act

Israel, you should be ashamed
Kill and maim thousands of civilians in our name
Claiming you hitting terrorists but children in your aim
Even murder relief workers, blood spilling from they brain
While they tried to drive the ambulance
Damn they couldn't stand a chance
Even bomb students, hospitals, mosques, Rafah, and Khan Yunis
Shot em in the back like the cops to Oscar Grant
And in each case the good old United States sponsored that
Seven million a day that we pay tax
And AIPAC's lobbyists is robbing us
Sometimes it feels like there ain't no stopping this
But now nobody can deny it cause you made it too obvious
Naked truth exposed like the emperor's clothes
The struggle's getting hotter and the temperature rose
Since 1948, when you formed the state
Palestinian people still defending their homes
They ain't been surrendering, no

Look, I'm Israeli, my government's so arrogant
War criminals who call Palestinian's terrorists
For resisting extinction and occupation
Comparing this to genocide and reservations of Native Americans
It's a massacre, kick out their ambassador
Divest from their apartheid like South Africa
Boycott em like King to Montgomery buses
Show them we want peace but only with real justice
They murdering the media and witnesses left
We gonna stop shopping at all the businesses that invest
In building their settlements and gentrifying our corners
Illegal walls over there and the US-Mexico border
Build a worldwide movement til the truth is heard
And supporting the Israeli's who refuse to serve
All the C.O.s who AWOL when deployed to Iraqi stations
All the people rallying while the cops are chasing
If we enlisted in the system, we got an obligation
We ain't got the patience, time to stop the occupation, yeah