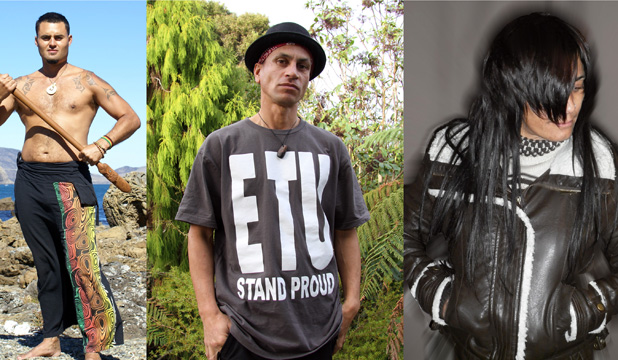 "Nigger!" The biker's insult blindsided the eight-year-old boy, shattering his vision of both Maori and pakeha (white) society in Aotearoa, the original name of New Zealand. The verbal attack sharpened the boy's awareness of his society's colour lines. Afterwards, he couldn't stand the sight of his fellow Maori cast as the peaceful but subordinate native.

Nor could he look up to indigenous gangs in his working-class neighbourhood of Upper Hutt, outside the capital Wellington. Turning to white society, he felt oppression. So the boy began to look inward, to imagine a "new breed" -proud of his Maori past and committed to a radical break with the legacy of colonial domination.

Today, at the age of 34, Dean Hapeta will refer to himself as "one bad nigger" in reference to his hardcore politics as a rapper. Here lies Hapeta's strength and, for some, his weakness: the ability to weave Maori culture, language and political demands - from land and fishing rights to economic equality - within the style and context of black American hip-hop.

Hip hop music (also referred to as rap or rap music) is a style of popular music. It is made up of two main components: rapping (MC-ing) and DJ-ing (audio mixing and scratching). Along with breakdancing and graffiti (tagging), these are the four elements of hip hop, a cultural movement which began among African Americans and Latinos in New York City in the early 1970s. One form, gangsta rap, caused controversy over nihilistic, self-indulgent lyrics which promoted violence, promiscuity, drug use and hatred of women.

However Hapeta's rap is more "haka rap," a challenge to young Maori to stand up for their communal rights and fight exploitation, whether by capitalists or drug dealers. As Hapeta has matured, his perfomance has abandoned the adolescent imitation of Black American speech ("dem had many clues" has become "they had many clues") and his delivery has become more powerful, expressing his confident warrior strength.

Indeed Hapeta and his group Upper Hutt Posse (UHP) have influenced a generation of hip-hop bands and fans across the country. Before these "warriors" stormed the stage, Maori music was generally marginalised like an exotic trinket of the past used in the "ritual" of entertaining tourists.By rapping in their language and incorporating the sounds, values and history of their people, Hapeta and like-minded artists shatter stereotypes of what it means to be Maori.

Hapeta's political consciousness did not flow from the "cultural awakening" of the 1970s when the Maori middle-class rediscovered its roots. He followed the learning curve of the streets, his whakapapa ("the place where one belongs"). Tuned into the liberation music of Bob Marley, Jamaica's legendary reggae musician, the songs of resistance rang true in his disadvantaged neighbourhood, where police confrontations were a rite of passage.
Karanga, rangatahi, whakarongo, whakarongo
Ko nga tamatoa matou, ka tahu te ahi
Kaua e nukurautia, kia mau ki to Maori

There's a lot of people who think they're tough today
But chiefs like Te Rauparaha woulda blown dem away, Cher!
Hone Heke he expressed his disgust by
cutting down the flagpole, huh
Pakeha killed Maori inna Matawhero
So Te Kooti exacted it in a slaughter.

Yes, the Maori battalion inna World War Two
Staunch on the battlefield they had many clues
Like Moana Ngarimu 1 on hill 209, Victoria Cross so true so strong
Yes the Maori was a bad warrior
Strike fear in the hearts of the Babylon soldier
Yeah its true, yeah its true, that's why I'm talking to you
Kia kaha, kia kaha two one two two

The man who tried to kill him was Von Tempsky
But he became a victim of his own folly
Cause Titokowaru 2 was too smart you see,
Guerilla warfare, huh, Maori
The British raided a Pa they thought it'd be a victory
But Kawiti fooled the enemy
The British raided the Pa yeah but they got shot down
Cause Kawiti had a plan and it was sound, break down

Te Rangihaeata believes in holding land
Against the foe, yo, the British man
To him land's essential to the mana of the chief
And in the Hutt there were some hardcore feats
In 1846 in the Hutt Valley I said
Fighting broke out between the British and the Maori
And more than one settler on disputed land
Was killed when the Maori fought the British Plan

Cause white rule and injustice go hand in hand
So against that is where we stand
Don't forget those who've fought before
Our struggle continues more and more 3
Yeah it's a struggle, it's a struggle
The system's got us in a muddle
So strive to get outta this puddle.

Well I always put my mind to the rhyme
Don't wear no gold chains cause we ain't that kind
Don't neva rap and say I think I'm cool
Just preach the truth with us that's a rule
Yeah, rising inflation to me is a crime
And sport is politics so don't mess with my mind
They falsely own our land so they really don't
We've been ripped off man so shut up I won't

You gotta learn the history to know where ya truly are
Learn it somehow this ignorance has gone too far
Have self determination in what ya gonna do
Kia kaha, kia mau ki to Maori
Don't let no-one stand on you.