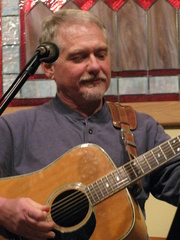 "I'm just a lyricist who's been fortunate enough to have had the pleasure of collaborating with a few very talented musicians/artists.
This song really highlights Don's talents..." (Jonie)
Fresh from their musters and straight into war
Battalions of soldiers stampeded the shore
Some there for love of their God and their country
Others were fighting for more
As they pushed on like civilized men

Praying for silence that follows the storm
They called out to mothers and wives safe at home
Barraged and beleaguered, they fell like a forest
Then bled side by side, all alone
And they died there like civilized men

The winners and losers, the treaties and deals
The wounds that will fester and never quite heal
The soldiers amassed at the edge of a nightmare
Eating their last blessed meal
In the strongholds of civilized men

I look to the heavens and wonder at us
How angry we all seem to be
While inside a doorway, a victim of war
Longs for a moment of peace

There are no martyrs who die to defend
Just fathers and brothers, our sons and our friends
All that remains of the valor and vengeance
Are the tears we all cry in the end
And we call ourselves civilized men..