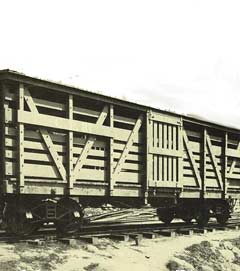 based on "HaRakeves HaMisnaggenes - The Singing Train", a story by P. Flexer in M.S. Geshuri's

Although he was centered in Otvoczk, Rebbe Shaul Yedidya Elazar of Modzitz had Chassidim throughout the major towns and cities of Poland. One of these was Reb Azriel David Fastag, who became noted for his exceptional voice throughout Warsaw. Many came to the shul where Reb Azriel David and his brothers, who were also blessed with lovely voices, would daven on the Yamim Noraim [High Holy Days]. Reb Azriel David was the ba'al tefilla [led the prayers], while his brothers accompanied him as a choir. His crisp, clear and moving voice had a profound effect on all who heard him.

He lived simply, supporting himself from a small dry goods [clothing] store, but his happiness and fulfillment came of another source - the world of Negina. His moving tunes made their way to Otvoczk, where his Rebbe, R. Shaul Yedidya Elazar appreciated them immensely. The day a new niggun of R. Azriel David's came to the Rebbe was like a "Yom Tov" for him. [One of his most memorable compositions is "M'heira Yishama," a wedding tune.]

Dark clouds began to cover the skies of Europe - the clouds of Nazism. In spite of the terrible decrees, the yellow patch and the ghettoes, most Jews could not fathom what was about to befall them. Only a few "read the map" correctly and managed to escape the clutches of the Nazi occupation to safe havens. One of them was the Modzitzer Rebbe, Rebbe Shaul Yedidya Elazar, whose Chassidim made a tremendous effort to save him. As the Nazis entered Poland, the Chassidim smuggled him out of Poland to Vilna [Lithuania], and from there he made his way across Russia to Shanghai, China, eventually arriving in America in 1941.

Meanwhile in Poland, tens of thousands of Jews were being 'shipped off' daily to their death in cattle cars that were part of the railway system. Aroused from their warm beds in Warsaw, husbands were separated from their wives, children from their parents. The elderly were often shot on the spot in front of their loved ones. Then the Jews were gathered and sent off in these trains to a place where their existence would no longer trouble those dregs of humanity known as the Nazis - to Auschwitz, Treblinka, Majdanek, etc. What did it look like in one of those cattle cars of the "death train"?

What could one expect to find other than people in their death throes - gasping, sighing and crying? One could hear the stifled cries of children, crushed together and trampled upon by the spiked boots of the evil, cruel Nazis.

However, in one such car, it seemed like a "tone" of life managed to emerge from these crushed people. What - people on their way to the slaughter, singing??? Is this not some cruel Nazi joke? Let us look a bit closer...

An elderly Jew, wrapped up in his ragged clothing, his face white as snow, makes his way over to his neighbor on the death train, begging him to remind him of the niggun the Modzitzer Rebbe sang on Yom Kippur for the Avoda, to "Ma'areh Kohen."

"Now - now - all you want to know about is niggunim?" answered the other, with a hard look at the Chassid, thinking that maybe all the suffering had caused him to lose his mind.

But this Modzitzer Chassid, Reb Azriel David Fastag, was no longer paying attention to his friend, or to anyone else on the train. In his mind, he was at the Amud HaTefilla [prayer stand] next to the Modzitzer Rebbe, and it is he who was the baal tefilla before all the Chassidim.

Suddenly, before his eyes, the words of the twelfth [of thirteen] Principle of Jewish Faith appeared: "Ani Ma'amin b'Emuna Sheleima, b'vias HaMoshiach; v'af al pi she'yismamaya, im kol zeh, achakeh lo b'chol yom she'yavo - I believe with perfect faith in the coming of the Moshiach; and even though he may tarry, nevertheless, I wait each day for his coming." Closing his eyes, he meditated on these words and thought, "Just now, when everything seems lost, is a Jew's faith put to the test."

It was not long before he began to hum a quiet tune to these words. Amidst the heavy atmosphere of death and despair on the train, Reb Azriel David's dveykus [attachment to Hashem] took him above it all.

"How can one of us be singing at such a time?" wondered his fellow Jews on the train. And with such a sweet voice! It must be, that from Heaven they are accompanying us, in mourning, to our death... But listen, what is it that they are singing? You're about to be slaughtered, shot, poisoned or burnt and what are they singing? -- I believe!!!"

The Modzitzer Chassid was completely above it all, a pillar of song, bringing out of his bloodied lungs the song of his life -- the song of the eternity of the Jewish People. He was unaware of the silence in the cattle car, and of the hundreds of ears listening attentively in amazement. He also didn't hear the voices as they gradually joined his song, at first quietly, but soon - growing louder and louder! Meanwhile, he made sure to write out the notes of the newly composed song...

The moving tune, with its holy words, had penetrated the hearts of the Jews on the train, and had joined to the pure emuna [faith] in their hearts, which burst out from them in the form of this great song. The song spread from car to car. Every mouth that could draw a breath from those congested cattle cars, filled with live "corpses" and pungent with the odor of people crowded together, joined in a piece of "Ani Ma'amin - I believe." It became a wonderful, amazing symphony unto itself.

As the train neared the death camp, the railway workers wondered: from where is this amazing song coming? Could the Jews be singing their own burial service tune?

As if waking from a dream, Reb Azriel David opened his eyes to the sight of the singing train. His eyes were red from crying; his cheeks, wet with tears. Deeply moved, he yelled to whomever would listen, "My dear brothers! This niggun is the song of the Jewish soul. It is a song of pure faith, for which thousands of years of exile and troubles cannot overcome!"

Then, in a choked voice, he continued, "I will give my portion in Olam Haba [the World to Come] to whomever can take these notes of my song 'Ani Ma'amin' to the Modzitzer Rebbe!"

A hushed silence descended upon the train. Reb Azriel David lifted himself up by the ends of his thumbs, searching through the crowd that surrounded him. Two young men appeared, promising to bring the notes to the Modzitzer Rebbe, at any cost. One of them climbed upon the other, and in the small crack of the train's roof that only he knew of, made a hole from which to escape. Poking his head out under the open sky, he said, "I see the blue Heavens above us, the stars are twinkling and the moon, with a fatherly face, is looking at me."

"And what do you hear?" asked his companion.

Turning white, the young man answered, "I hear the Ministering Angels singing the Ani Ma'amin tune, and it's ascending to the seven firmaments of Heaven..."

Bidding farewell to their brothers and sisters on the train, the two proceeded to jump off, one after the other. One was killed instantly from the fall, while the other survived, taking the notes of the song with him. He eventually found his way to Eretz Yisrael [perhaps to the Rebbe's son, the Imrei Aish, who was in Tel-Aviv], and the notes were sent by mail to Rebbe Shaul Yedidya Elazar in New York.

Upon receiving the notes and having the "Ani Ma'amin" niggun sung, the Rebbe said, "When they sang 'Ani Ma'amin' on the death train, the pillars of the world were shaking. Hashem said, 'Can it be that My Torah is a fraud? No! But whenever the Jews will sing 'Ani Ma'amin', I will remember the six million victims and have mercy on the rest of My People.'"

It is told that on the first Yom Kippur that the Rebbe sang the "Ani Ma'amin," there were thousands of Jews in the shul. The entire Kahal [congregation] burst into tears, which fell like water into the pool of tears and blood of the Jewish Nation. The tune soon spread throughout Klal Yisrael [world Jewry].

"With this niggun," said Rebbe Shaul Yedidya Elazar, "the Jewish People went to the gas chambers. And with this niggun, the Jews will march to greet Moshiach."

compare to original
compare to other versions
Language: Hebrew
La trascrizione in caratteri latini secondo i principi generalmente usati in questo sito
Romanized Hebrew text according to the principles generally used in this website
ANI MAAMIN


compare to original
compare to other versions
Language: English
English Version
I BELIEVE

I believe with a complete belief
In the coming of the Messiah
And even though he may tarry
I will wait for him,
whenever he comes.