Long Road Out Of Eden 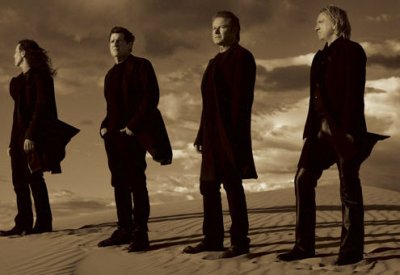 silent stars blinking in the blackness of an endless sky
cold silver satellites, ghostly caravans passing by
galaxies unfolding, new worlds being born
pilgrims and prodigals creeping toward the dawn
but it's a long road out of eden

freeways flickering, cell phones chiming a tune
we're riding to utopia, road map says we'll be arriving soon
captains of the old order clinging to the reins
assuring us these aches inside are only growing pains
but it's a long road out of eden

back home i was so certain
the path was very clear
but now i have to wonder: “what are we doing here?”
I'm not counting on tomorrow
and i can't tell wrong from right
but i'd give anything to be there in your arms tonight

weaving down the american highway
through the litter and the wreckage and the cultural junk
bloated with entitlement, loaded on propaganda
and now we're driving dazed and drunk

been down the road to damascus,
the road to mandalay
met the ghost of caesar on the appian way
he said, "it's hard to stop this bingeing, once you get a taste."
"but the road to empire is a bloody stupid waste."

behold the bitten apple - the power of the tools
but all the knowledge in the world is of no use to fools
and it's a long road out of eden....