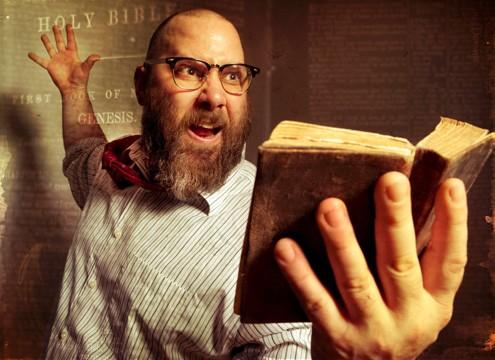 About America’s response to the 9/11 attacks, rather than the attacks themselves. A masterpiece. The sample at the end is from the movie "Don’t Look Back", and is taken from an interview with Bob Dylan by Time magazine.
(from Music To Die For - 50 greatest protest songs)
(Bernart Bartleby)
(People talking)
I'm tired of hearing of young fellows, who think you know it all.
You know nothing, you have not seen a shot fired,
and you're waving the damn flag.

I'm just watching some bullshit.
On the news. It's fucking bullshit.
Reporters trying to win a fucking Emmy.

Makeshift patriot,
the flag shop is out of stock, I hang myself at half mast.
(3x)

It's the makeshift, the patriot,
the flag shop is out of stock,
I hang myself for your live telecast
Scared, so scared, stay scared.

Coming live from my own theater room, Beautiful weather offered a nice shine,
Which is suitable for a full view of an altered skyline.
It's times like these I freestyle biased opinions every other sentence.
My journalist ethic slips when I pass some offensive gestures.
Don't give me that ethical shit.
I've got exclusive, explicit images to present to impressionable American kids,
and it's time to show this world how big our edifice is.
That's exactly how they attacked,
with a typically dark-skinned Disney villain.
Use civilians against civilians and charge the Trojan horse into our buildings.
Using commercial aviation as instruments of destruction.
Pregnant women could have protected their children;
wheelchairs were stairway obstructions.
I had to back-pedal from the shower of glass and metal,
wondering if after it settles,
we'll find who provided power to radical rebels.
The melting pot seems to be calling the kettle black when it boils over,
but only on our own soil,
so the little boy holds a toy soldier,
and waits for the suit and tie to come home.
We're going to wait until he's older, though,
before we destroy hopes for a colder war to end.
I'll get a close-up of his head.

Makeshift patriot, the flag shop is out of stock,
I hang myself at half mast.
(3x)


It's the makeshift, the patriot,
the flag shop is out of stock,
I hang myself while the stock markets crash.
Scared, so scared, stay scared


The city is covered in inches of mud.
I see some other pictures of victims erupt.
Grieving mothers are thinking their children are stuck,
leaping lovers are making decisions to jump while holding hands,
to escape the brutal heat;
sometimes in groups of three.
The fallout was far beyond the toxic clouds where people would like to breath,
but all they say when all was said,
beyond the talking heads,
was the bloody dust with legs,
looking like the walking dead calling for meds.
All the hospitals overwhelmed,
volunteers need to go the hell home.
Moments of silence for firefighters were interrupted by cell phones.
Who's going to make that call, to increase an unknown death toll?
Someone we rally behind.
He's got a megaphone, promising to make heads roll.
We'd cheer him on, but asbestos is affecting our breath control.
The less we know, the more they fabricate,
the easier it is to sell a soul.

Makeshift patriot, the flag shop is out of stock,
I hang myself at half mast.
(3x)


It's the makeshift, the patriot,
the flag shop is out of stock,
I hang myself while the stock markets crash.
Scared, so scared, stay scared


(Man talking)
There is a new price on freedom, so buy into it while supplies last.
Changes need to be made;
no more curbside baggage,
seven p.m. curfew,
racial profiling will continue with less bitching.
We've unified over who to kill, so until I find more relevant scripture to quote,
remember, our kind is bigger, stronger, smarter, and much wealthier.
So wave those flags with pride, especially the white part.

We're selling addictive, twenty-four hour candlelight vigils on TV.
Freedom will be defended at the cost of civil liberties.
The viewers are glued to television screens, stuck,
'cause lots of things seem too sick.
I use opportunities to pluck heartstrings for theme music.
I'll show you which culture to pump your fist at,
which foot is right to kiss.
We don't really know who the culprit is yet,
but he looks like this.
We know who the heroes are,
they're not the xenophobes who act hard.
We taught the dog to squat,
how dare he do that shit in our own back yard.
They happen to scar our financial state,
and char our landscape.
Can you count how many times so far I ran back the same damn tape?
While the cameraman creates news and shoves it down our throats,
on the west bank, with the ten second clip put on constant loop to provoke US angst.
So get your tanks and load your guns and hold your suns in a family huddle,
'cause even if we win this tug of war and even the score,
humanity struggles.
There's a need of blood for what's been uncovered under the rubble;
some of them dug for answers in the mess,
but the rest were looking for trouble.

Makeshift patriot,
the flag shop is out of stock,
I hang myself at half mast.
(3x)

It's the makeshift, the patriot,
the flag shop is out of stock,
I hang myself.
Don't waive your rights with your flags.

What kinds of truths are they omitting?

Well, anything.
Even on a worldwide basis.
They'd just go off the stands in a day if they printed really the truth.

What is really the truth?

Well, really the truth is just a plain picture.