A song about the horrors of the Buchenwald concentration camp. 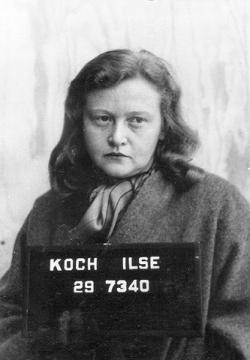 Ilse Koch, born Ilse Köhler (September 22, 1906 – September 1, 1967), was the wife of Karl Koch, the commandant of the concentration camps Buchenwald from 1937 to 1941 and Majdanek from 1941 to 1943.
Ilse is infamous for taking souvenirs from the skin of murdered inmates with distinctive tattoos. Claims that she had a lampshade made out of human skin have never been verified and were discounted at her post-war trial. She was known as "The Witch of Buchenwald" ("Die Hexe von Buchenwald") by the inmates because of her sadistic cruelty and lasciviousness toward prisoners. She is also called in English "The Beast of Buchenwald" and "The Bitch of Buchenwald."
She was born in Dresden, Germany, she was the daughter of a factory foreman. She was known as a polite and happy child in her elementary school. At the age of fifteen she entered an accountant school. Later, she went to work as a bookkeeping clerk. At the time the economy of Germany had not yet recovered from Germany's defeat in World War I. In 1932 she became a member of the rising Nazi Party. Through some friends in the Nazi organizations SA and SS, she met in 1934 Karl Otto Koch to whom she married two years later.
Her rise to infamy began in 1936 when she began working as a guard and secretary at the Sachsenhausen concentration camp near Berlin which was commanded by her soon-to-be husband. In 1937 she came to Buchenwald not as a guard, but as the wife of the commandant. There, influenced by her husband and her power, she began torturing the inmates of the camp. In 1940 she built an indoor sports arena, which cost over 250,000 marks, most of which were taken from the inmates. In 1941 Ilse became an Oberaufseherin ("chief overseer") over the few female guards who served at the camp.
In 1941 Karl Otto Koch became the commander of Majdanek. In 1943 both he and Ilse were arrested by the Gestapo for embezzlement and the murder of inmates. Ilse was imprisoned until late 1944 or early 1945 in Weimar. In early 1945, her husband was sentenced to death by an SS court in Munich and executed in April 1945. Ilse was acquitted by the Nazis and went to live with her surviving family in the town of Ludwigsburg. She was arrested by U.S. authorities on June 30, 1945.
She was tried by a war crimes tribunal and sentenced to a life term in 1947, later commuted to four years, by reason of "insufficient evidence". After being released in 1951, she was immediately re-arrested and tried by a German court again due to the large number of protests against the decision, and was sentenced to a life term. She committed suicide by hanging herself at Aichach women's prison on September 1, 1967 after writing a final letter to her son. She was sixty years old.
I'm here in Buchenwald.
My number's on my skin.
Old Ilsa Koch is here.
The prisoners walk the grounds.
The hounds have killed a girl.
The guards have shot a man.
Some more have starved to death.
Here comes the prisoner's car.
They dump them in the pen.
They load them down the schute.
The trooper cracks their skulls.
He steals their teeth of gold.
He shoves them on the belt.
He swings that furnace door.
He slides their corpses in.
I see the chimney smoke.
I see their ashes hauled.
I see their bones in piles.
Lamp shades are made from skins.
I'm choking on the smoke.
The stink is killing me.
Old Ilsy Koch was jailed.
Old Ilsy Koch went free.
I've got to hush my song.
Here comes the super man.
I'll see you later on.
I've got to duck and run.