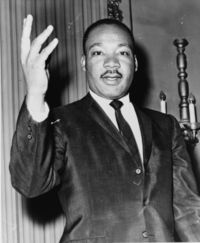 "Happy Birthday" is a 1980 single written, produced, and performed by Stevie Wonder for the Motown label. Wonder, a social activist, was one of the main figures in the campaign to have the birthday of Dr. Martin Luther King, Jr. become a national holiday, and created this single to make the cause known.
The song, one of many of Wonder's songs to feature the use of a keyboard synthesizer, features Wonder lamenting the fact that anyone would oppose the idea of a Dr. King holiday, where "peace is celebrated throughout the world". The holiday, he proposes, would facilitate the realization of Dr. King's dreams of integration and "love and unity for all of God's children".
Wonder used the song to popularize the campaign, and continued his fight for the holiday, holding the Rally for Peace Press Conference in 1981. United States President Ronald Reagan approved the creation of the holiday, signing it into existence on November 2, 1983. The first official Martin Luther King Day, held the third Monday in January of each year, was held on January 20, 1986, and was commemorated with a large-scale concert, where Stevie Wonder was the headlining performer.

from Wikipedia, the free encyclopedia
You know it doesn't make much sense
There ought to be a law against
Anyone who takes offense
At a day in your celebration
Cause we all know in our minds
That there ought to be a time
That we can set aside
To show just how much we love you
And I'm sure you would agree
It couldn't fit more perfectly
Than to have a world party on the day you came to be