1994: The Rwanda Genocide
A RWANDAN SONG CYCLE
© 2004 Tom Flannery and Lorne Clarke
a SongaWeek.com production
www.rwandasongs.com
Clarke & Flannery love to hear your thoughts on the song cycle. Email them to anthracite@rocketmail.com.


Rwanda - The Rise And Fall – Rwandan Eyes – Paul Kagame Blues – Romeo Dallaire - Isn't That A Shame? – I'm Coming Home – Confession – Bikindi – Madame Agathe – Joseline – Requiem For Butare – Talkin' First Day Working At The UN Blues – Christmas In Kigali – Tell Me How – Do You Ever Wonder? – Lake Victoria – How Do We Sleep At Night? 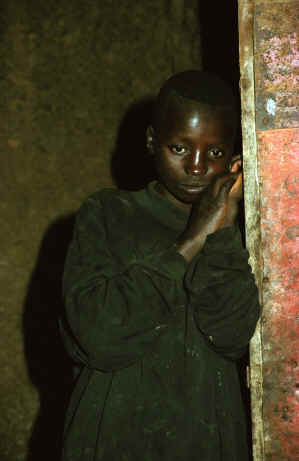 At first you can see nothing but the eyes. And you see that there is plenty of life there. They are not cold eyes. There is surely fear, because deep inside there has never been anything but fear for her…but one can register a flicker of hope as well….if you gaze into them long enough. Just what have those eyes seen? Have they seen murder? Have they seen rape? Do they now inhabit a world in which all family is gone…replaced by….what? How do you replace family? If you could speak with her….what would you say? What would seem appropriate? Maybe it is not necessary to speak. Maybe a smile is all she needs? After all, how often are you close enough to deliver a smile that really matters?

She leans against a wall that has seen better days. There is a large gash missing, perhaps taken out during fighting of some kind. Perhaps the indirect result of a grenade? Or maybe the violent blow of a machete that missed its intended target. She leans against the wall as if she it holding it up, instead of the other way around. Her country’s genocide has knocked over every foundation she has ever known. Why should this one not fall on her as well?

To move from her hiding place would risk….what? Are the killers still out there? Does she know them by sight? Worse, do they know her by sight? And with eyes like hers, do they dare let her live? To step from her darkness into the light of day could mean…well, you know damn well what it could mean.

She is, without a doubt, beautiful. Even judging by western television standards, she remains striking. The aforementioned eyes. The perfect nose. The skin as soft and perfect as a newborn’s. Her black clothing only adds to her allure….plying our imaginations with mystery, which we love, and danger, which we love even more as long as that danger can be imagined from the safety of our homes. True danger is unpleasant after all.

There is a dignity to her that is almost overwhelming. In some ways comparing her to another girl of the same age in a western country would not be fair. What would they have to talk about? What do they have in common? You say…”childhood”…meaning I suppose that after a good meal or two she’d be acclimated to the ways of how children are supposed to act…..and would be lying on the floor with the rest of them playing with dolls? I don’t think so. I’m fairly certain her childhood was taken from her…and another long look into those eyes should tell you that it’s not coming back.

Does she dream? The very word “dream” conjures up something pleasant. That’s why we had to invent the word “nightmare”. Even though a nightmare is a dream, one word is not sufficient to describe how the mind works when the eyes close.

We don’t dream in color….or so they say. I swear I do but nobody believes me. Regardless, what images in her mind would come back to her when she sleeps? Can the horror she has seen be conjured up again?….or is it buried so deep that even subconscious excacation is fruitless? If the latter is true, is that not some sort of sign that God does indeed exist? If proof were indeed given to her of a supreme being, would that make any difference to her? Would she say…..”what were you doing when my family was being hacked to death?” Would she not have the right to an answer?

Look one last time before you move on. Can you say that you did not let her down? She cried and the world did indeed hear her…..don’t let anybody tell you otherwise. We heard her and chose to do nothing. Why? If she were white would it have mattered? Perhaps, although there are mass graves in Bosnia filled with whites who were equally ignored. Maybe it’s more than race. Maybe it’s deeper in the soul than that.

I can tell you that I have changed….and I hope for the better. But who can really say? Let me hear you all say it….”Never Again”….and I’ll think….”until the next time.”....and then maybe I'll do nothing again.
I'd like to look through his eyes
to see what he can see
I'd like to talk with his tongue
the words he learned to speak
I'd like control of the arm
that drew the machete high
and to get inside the ears
that ignored my children's cry

I'd like to tell someone my story
but just where to begin?
will you judge it from the inside
or from the color of my skin
will you write of ethnic hatreds
that same old western song
or the fact that we were one people
until your masters came along