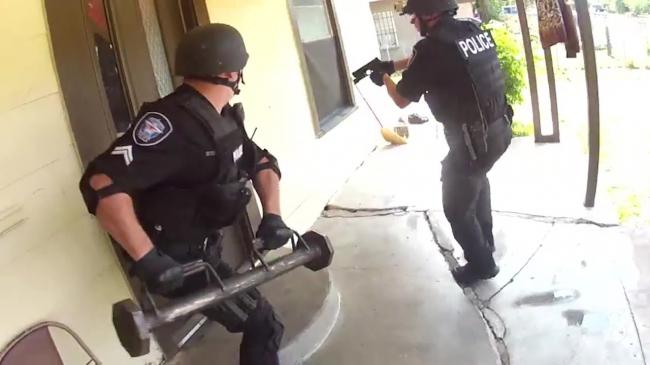 E infatti nessuno aveva bussato tre anni prima alla porta di Fred Hampton, ucciso mentre dormiva in una spedizione omicidia organizzata dall'FBI e dalla polizia di Chicago.
Um, we want to do a poem for one of our unfavorite people, um, who’s now the head of the, uh, Nixon campaign. He was formerly the Attorney General named John Mitchell. Um, Nixon’s campaign seems to be out, you know, getting off on a rather hip foot after his trip to China in the name of peace, uh, while they were killing people right across the street, so to speak, in, uh, North and South Vietnam. But, um, no-knock, the law in particular, was allegedly, um, aheh, legislated for black people rather than, you know, for their destruction. And it means, simply, that authorities and members of the police force no longer have to knock on your door before entering. They can now knock your door down. This is No Knock.

You explained it to me, I must admit
But just for the record, you were talking shit
Long rap about no-knock being legislated
For the people you've always hated
In this hellhole that you, we, call home

For my protection?
Who's gonna protect me from you?
The likes of you?
The nerve of you?
To talk that shit face-to-face
Your tomato face deadpan
Your deadpan deadening another freedom plan

And double-lock your door
Because, soon, someone may be no-knocking—ha, ha!
For you

No Knock. To be slipped into John Mitchell’s suggestion box.