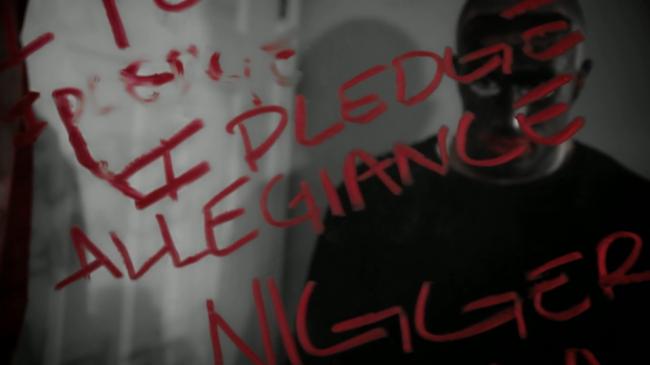 Miss America non è una bella ragazza senza scrupoli ma è la personificazione degli Stati Uniti.
«I pledge allegiance to the Flag of the United States of America, and to the Republic for which it stands: one Nation under God, indivisible, with liberty and justice for all.»


Shorty's not the wife type, she goes as the wind blows
Fuck the world literal political nympho
Sex symbol of hope for the flirtatious offer
But she keeps her legs closed for those south of the border
Sort of a tease never goes the whole way
Accept for her vacay’s to Guantanamo Bay
U.K. put her on the scene at 13
Now round the way she’s known as the American Dream
Rolled with the Taliban for Afghan poppy
Sold coke with the Contras, built banks with Nazis
Folks Illuminati, so despite the floss
Wasn’t none of her shit stitched by no Betsy Ross
Born date on 4th of July
And by the 5th, she had the whole world caught up in her lies
Her eyes dollar signs, money talk keeps her dripping
Mei Guo vixen, queen of capitalism…

Don’t be fooled by the pageantry, it’s all cosmetic
Her ethics are deceptive, silicone synthetic
Ar from sympathetic lest her interests are invested
And she shops at stock markets in debt with bad credit
Self-centeredness bring out the worst in Mother Earth
Toxic relationship, she puts her needs first
Acts all holier than thou
But make sure she separates estate from the church
Post racial but I can’t tell
The word nigga still rolls off her tongue so well
The new Jim Crow from up North to down South
And took 500 years to let Black folk in the house
Miss America…

Said there’s no just war, there’s just war
Guns bust more for the blood lust whore to get fucked more
Foul to the core, she did the 9th Ward raw
And she loves getting face at the top of Mount Rushmore
Miss America was burning before Libya
Gonorrhea, syphilis, herpes, chlamydia
Signature been on so many broken promises
You’d think her new relationships required doctor documents
Turn politricks straight ripping and robbing
Bad break with her ex, Osama Bin Laden
Been getting it popping since she knew she could bank it
Giving hand jobs naked under small pox blankets
Fake lips and tits, still chasing the dragon
At the next party wasted, openly tea bagging
Bragging like she’s the only one under God
But 'round here, Miss America’s the smuttiest broad
Miss America