Where Are You Now, My Son?

War in Viet Nam as seen from the U.S.
[1973]
Lyrics and music by Joan Baez
Testo e musica di Joan Baez
Album: Where Are You Now, My Son? 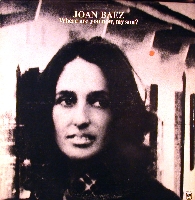 Where Are You Now, My Son? is an album Joan Baez released in early 1973. One side of the album featured recordings Baez made during a US bombing raid on Hanoi over Christmas 1972. Included on the recording are the voices of Barry Romo, Michael Allen, and human rights attorney Telford Taylor, with whom Baez made her famous 1972 visit to North Vietnam.

The album's other side, featuring songs, written by Baez, Mimi Fariña and Hoyt Axton, was recorded in Nashville in January 1973.

From the album's liner notes:

"...The war in Indochina is not yet over, and the war against violence has barely begun...." - Joan Baez "
en.wikipedia
It's walking to the battleground that always makes me cry
I've met so few folks in my time who weren't afraid to die
But dawn bleeds with the people here and morning skies are red
As young girls load up bicycles with flowers for the dead

An aging woman picks along the craters and the rubble
A piece of cloth, a bit of shoe, a whole lifetime of trouble
A sobbing chant comes from her throat and splits the morning air
The single son she had last night is buried under her

They say that the war is done
Where are you now, my son?

An old man with unsteady gait and beard of ancient white
Bent to the ground with arms outstretched faltering in his plight
I took his hand to steady him, he stood and did not turn
But smiled and wept and bowed and mumbled softly, "Danke shoen"

The children on the roadsides of the villages and towns
Would stand around us laughing as we stood like giant clowns
The mourning bands told whom they'd lost by last night's phantom messenger
And they spoke their only words in English, "Johnson, Nixon, Kissinger"

Now that the war's being won
Where are you now, my son?

The days of our youth were fun
Where are you now, my son?