How We Gonna Make the Black Nation Rise 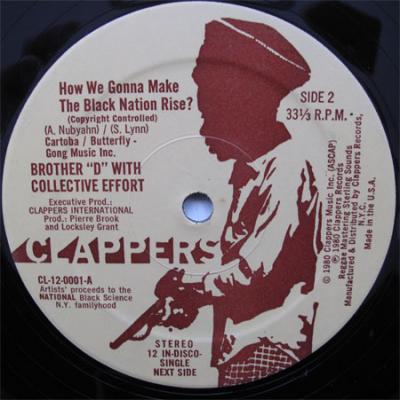 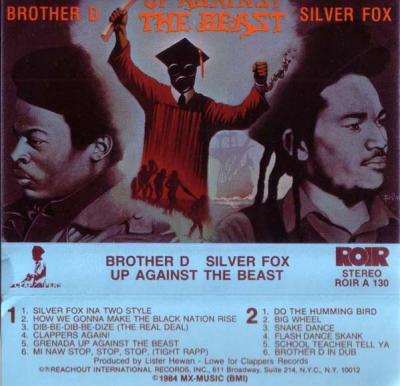 
“How We Gonna Make the Black Nation Rise?” is considered the first political rap record. Brother D (whose real name was Daryl Aamaa Nubyahn) was a school teacher in the South Bronx and also a member of the New York Family of Black Science, a revolutionary organization “dedicated to the uplifting of black people and to the acquiring of knowledge and skills.”

In his seminal 1985 book, Hip-Hop: The Illustrated History Of Break Dancing, Rap Music, and Grafitti, Steven Hagar tells the story of how the record came together.

“I noticed kids around my block doing rap, but there was no message,” said Nubyahn. “I was teaching math in a vocational training program and I started running some raps for the kids in my class. I made deals with them like, you do a certain amount of work and I’ll rap for you at the end of the period. And they loved that. There was a strong desire in rap records for people to soup themselves up. Big fantasies-folks in their teens talking about my big car, I’m a movie star, I’ve got all the women in the world. People are very materially centered. Something flashes on TV and they have to go out and get it. With the idea of hooking rap up with political information and the practice I got rapping for my students, I began to write.”
Set to a musical track taken from Cheryl Lynn’s disco hit “Got to Be Real,” Nubyahn repeated an angry refrain: “We’re rising up, we won’t take no more! "We’re rising up, we won’t take no more!”
Although it was an explosively effective record, it was far too political to attain wide popularity in hop hop circles. By 1982, when Grandmaster Flash and the Furious Five went into the studio to record their own version of a “serious” rap record, they hadn’t even heard of Brother D and Collective Effort.”

If you wanna know the truth, and that’s a fact
Let me hear you say, “And you know that!”
AND YOU KNOW THAT!

You dippy-dippy-dive and so-socialize
But how we gonna make the black nation rise?

While you party down yelling, shock the house
Get down, rock shock the house
The Ku Klux Klan is on the loose
Training their kids in machine gun use
Obey everything has its place and time
We can rock the house, too, as we shock your mind

We can brag, and we can boast
Producin' neither bread nor butter for our breakfast toast

Look at all the things that can prove the point
Sisters in the discos, brothers in the joint

As you dippy-dippy-dive and so-socialize
But how we gonna make the black nation rise?

Come on
My people, people, can’t you see
What’s really goin' on?
Unemployment’s high, the housing’s bad
And the schools are teaching wrong
Cancer from the water, pollution in the air
But you’re partying hard, like you just don’t care
Wake up y'all, you know that ain’t right
Cause that hurts everybody, black or white
Winter’s cold, can’t get no heat
Just move your body to the beat
While it takes you on a disco ride
Get high until you’re pacified
Our youth actin' like the living dead
Ain’t talkin' bout the body. Talkin' bout the head

Space out y'all to the disco rhyme
Movin' to the rhythm but you’re wastin' time
Stop and think. Do you know what’s real?
Well, let me educate you to the real deal
The media is telling lies
The devil’s taking off his disguise
They’re killing us in the streets
While we pay more for food that’s cheap
And all you wanna do is so-socialize

Remember the so-called Indian?
Look what they did to him
Maybe they’ll do that to us
Dare to struggle. Dare to win

I mean damn, get out of your seat!
Damn, get on your feet!
We say damn, and I will repeat!
We mean damn we’re tired of defeat!

Damn! No more sittin' around!
We say damn, it's time for throwin' down!

Damn. Let’s even the score
Cause We’re fired up and won’t take no more

The story might give you stomach cramps
Like America’s got concentration camps
People like Malcolm lived and died
Warning us about genocide
While you’re partying on, on, on, on and on
The ovens may be hot by the break of dawn
Your party may end one day soon
When they round the niggers up in the afternoon

No, no, brothers it's not like that
Gonna rap for the people, tell ‘em where it’s at

Don Pedro Albizu Campos he
Gave his life fighting for Puerto Rico to be free
While We fight each other with out a fear
But, fight the system you never dare
Well if you ain’t down We’ll get you first
Cause you slow us down just like a curse
Bob Marley’s spirit we can’t let die
Put a message in our music for I and I

Service to our people who we must redeem
Like Coltrane’s horn blowin' Love Supreme
You heard what Marcus Garvey said
And we can’t stand still
He said, “Up you mighty nation. You can
Accomplish what you will!”

America was built, understand
By stolen labor on stolen land
Take a second thought, as you clap and stamp
Can you rock the house from inside the camp?
As you’re moving to the beat 'til the early light
This country’s moving too, moving to the right
Prepare now, or get high and wait
Cause it ain’t no party in a police state

We’re not anti- any other racial group
Just understand we’re pro-Black
And we’re against any one or thing
That tries to hold us back
So think, but don’t take too long
The time is getting late
And deejays if you’ve got a mic
It’s your job to educate

While you dippy-dippy-dive and so-socialize
Are you gonna help the Black Nation rise?

YOU DIPPY-DIPPY-DIVE AND SO-SOCIALIZE
HOW WE GONNA MAKE THE BLACK NATION RISE?

How We gonna make the Black Nation rise?
We gotta agitate, educate and organize!