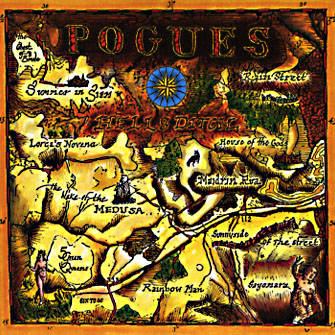 
This song is based largely on the life and writings of French author and playwright Jean Génet (1910-1986). Génet spent much of his youth and early adulthood in and out of prisons across Europe. In 1948, following his 10th conviction for theft, he received a life sentence but he was released upon the intevention of Jean-Paul Sartre and other stars in the French intellectual firmament.

"The killer's hands are bound with chains
At six o'clock it starts to rain..."

These lines relate to a scene in Génet's Miracle of the Rose (1946) describing the execution of a murderer.

"He'll never see the dawn again
Our lady of the flowers..."

Our Lady of the Flowers (1944) was Génet's first novel. It is based on his experiences in the French penal system.


"Genet's feeling Ramon's dick
The guy in the bunk above gets sick
In the cell next door the lunatic
Starts screaming for his mother..."
Génet's prison novels contain graphic descriptions and passionate defenses of homosexuality and vivid descriptions of the horrid conditions within the prison walls.

poguetry.com
Life's a bitch, then you die
Black Hell
Hell's ditch - naked howling freedom
The killer's hands are bound with chains
At six o'clock it starts to rain
He'll never see the dawn again
Our lady of the flowers

I could hear the screams from up above
If it ain't a fist it isn't love
As for our lady she kneels down
Her neck is bent, the blade comes down
Doing! There goes the breakfast bell
Back from heaven, back to hell
Naked howling freedom - Hell's Ditch