Bill and I (a Picket Song) 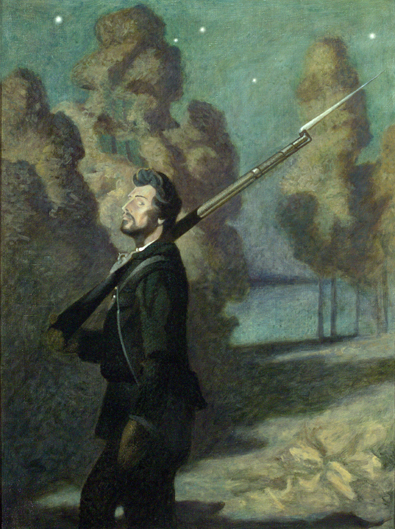 Se l’episodio cristallizzato in questa canzone fosse vero, chissà cosa sarà stato di Bill, il “vigliacco”, visto che il racconto di Frank è quello di un rapporto ai superiori…
The moon had just gone down, sir,
But the stars lit up the sky;
All was still in tent and town, sir,
Not a Rebel could we spy!
It was our turn at picket,
So we march’d into the thicket,
To the music of the cricket,
Chirping nigh.

O we kept a sharp look out, sir,
On Munson frownin’ nigh,
But no Rebel bein’ about, sir,
We sat down there by and by;
And we watched the brook a brawlin’.
And counted stars a’ fallin’,
Old memories overhaulin’,
Bill and I.

And says he, “Won’t it be glorious
When we fling our muskets by,
And home again victorious,
We hear our sweethearts cry
Welcome back”— A step! Who goes there?
A shot! By Heaven, the foe’s there!
Bill sat there all composure,
Bill not I.

By the red light of his gun, sir,
I marked the Rebel spy.
In an instant it was done, sir,
I had fired and heard a cry.
I sprang across the stream, sir,
O it seems just like a dream, sir,
The dizzy, dying gleam, sir,
Of that eye.

A youth— a very boy, sir,
I saw before me lie;
Some pretty schoolgirl’s toy, sir,
Had ventured there to die.
We had hated one another,
Yet I heard him murmur “Mother,”
So I stooped and called him “Brother”—
No reply.

I crossed the stream once more, sir,
To see why Bill warn’t by—
He was leanin‘ as before, sir,
But a film was o’er his eye.
I scarce knew what it meant, sir,
Till a wail broke from our tent, sir,
As into camp we went, sir,
Bill and I.