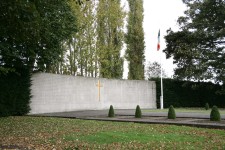 
The military cemetery at Arbour Hill is the last resting place of 14 of the executed leaders of the insurrection of 1916. Among those buried there are Patrick Pearse, James Connolly and Major John Mc Bride. The leaders were executed in Kilmainham and then their bodies were transported to Arbour Hill, where they were buried.

The graves are located under a low mound on a terrace of Wicklow granite in what was once the old prison yard. The gravesite is surrounded by a limestone wall on which their names are inscribed in Irish and English. On the prison wall opposite the gravesite is a plaque with the names of other people who gave their lives in 1916.

The adjoining Church of the Sacred Heart, which is the prison chapel for Arbour Hill prison, is maintained by the Department of Defence. At the rear of the church lies the old cemetery, where lie the remains of British military personnel who died in the Dublin area in the 19th and early 20th century.

A doorway beside the 1916 memorial gives access to the Irish United Nations Veterans Association house and memorial garden.

Arbour Hill is located at the rear of the National Museum of Ireland, Collins Barracks, which currently houses an exhibition of 1916 related material.
There's a sacred spot in [D]Dublin,
A place called Arbour Hill.
Where sleeps our noble martyrs
But their message rings out still.

To you their message is calling
As it did that Easter day
When they flew the flag of freedom
And proclaimed the I.R.A.

They marched the men in Dublin,
And for Ireland struck a blow.
They cherished it and raised the flag
Over Dublin's G.P.O.

Traitors tried to sell the cause,
And traitors they may be,
For Pearse had only one in mind,
Old Ireland's liberty.

They followed Tone and Emmet,
And faced a martyrs grave,
We then must take their message,
If our nation we must save.

Six counties still subjected,
And are held by Britain still,
So wake up and show devotion,
To the men of Arbour Hill.