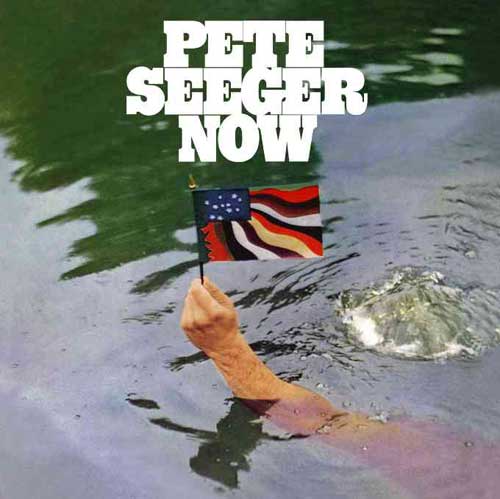 (Malcolm X once debated another black man as to whether they could call themselves Americans.  “I’m not an American,” said Malcolm, “Why do you think you are?”  “I’m an American because I was born here,” said the other.  “well, you could put a shoe in an oven and that wouldn’t make it a biscuit,” was Malcolm’s retort.  I’m afraid I have no such choice.  My light-skinned ancestors participated fully in the decisions, good and bad, which formed this nation.  I’ve spent a lifetime fighting the blacklisters who tried to make me feel like an outcast in my own home.  “I had an uncle who wrote a poem with the lines: “I have a rendezvous with death / At midnight in some flaming town. . .”  So I made some new verses.  I don’t have a regular tune for it yet — I kind of chant it to an improvised modal melody.”  — Pete Seeger)
At midnight in a flaming angry town
I saw my country’s flag lying torn upon the ground.
I ran in and dodged among the crowd,
And scooped it up, and scampered out to safety.

And then I took this striped old piece of cloth
And tried my best to wash the garbage off.
But I found it had been used to wrapping lies.
It smelled and stank and attracted all the flies.

While I was feverishly at my task,
I heard a husky voice that seemed to ask:“
Do you think you could change me just a bit?
Betsy Ross did her best, but she made a few mistakes.

My blue is good, the color of the sky.
The stars are good for ideals, oh, so high.
Seven stripes of red are strong to meet all danger;
But those white stripes: they, they need some changing.

I need also some stripes of deep, rich brown,
And some of tan and black, then all around
A border of God’s gracious green would look good there.
Maybe you should slant the stripes, then I’d not be so square.

”I woke and said, “What a ridiculous story.
Don’t let anybody say I suggested tampering with Old Glory.
”But tonight it’s near midnight, and in another flaming town
Once again I hear my country’s flag lies torn upon the ground.