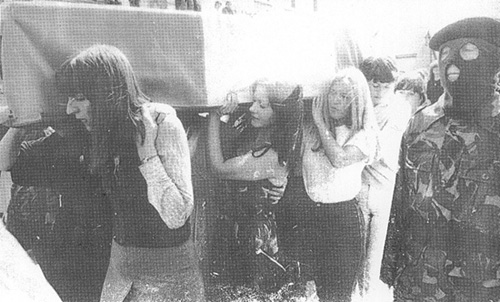 I funerali di Kieran Doherty. La bara è portata da Christina Carney (del Comitato Nazionale per il Blocco H), Elisabeth O'Hara, Goretti McDonnell e Pauline McElwee.
He was born in Belfast in Andersonstown
Brought on without fear or respect for the crown
His heroes were rebels, they were living in pain
And sonn he was part of the Belfast Brigade

The Hunger Strike is over, but the struggle goes on
To join Ireland´s martyrs ten brave men have gone
Don´t be disheartened, don´t weep for the lost
They do not give up or accept England´s laws.