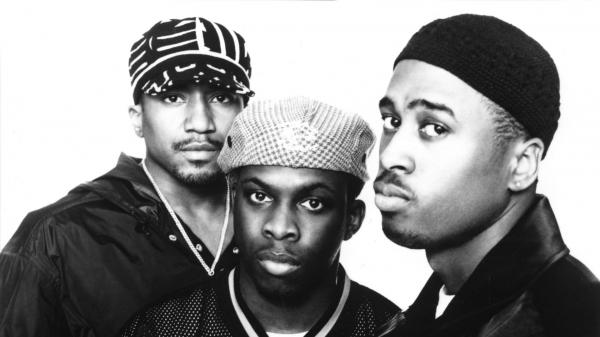 Linden Boulevard represent, represent
Tribe Called Quest represent, represent
When the mic is in my hand, I'm never hesitant
My favourite jam back in the day was Eric B. for President
Rude boy composer, step to me you're over
Brothers wanna flex, you're not Mad Cobra
MC short and black, there ain't no other
Trini-born black like Nia Long's grandmother
Tip and Sha they all that, Phife-Dawg ditto
Honey tell your man to chill, or else you'll be a widow
Did not you know that my styles are top-dollar?
The Five-Foot Assassin knocking fleas off his collar
Hip-hop scholar since being knee-high to a duck
The height of Muggsy Bogues, complexion of a hockey puck
You better ask somebody on how we flip the script
Come to a Tribe show and watch the three kids rip

Huh-huh, here we go, you know that I'm the rebel
Throwing out the wicked like God did the Devil
Funky like your grandpa's drawers, dont test me
We in like that, you're dead like Presley
When we coming through get tickets to see me
We work for the paper so there'll never be a freebie
Lyrics are abundant cause we got it by the mass
Egos are all idle cuz the music is the task
Valenzuela on the pitch, curveball, catch it
I think I got it locked, just smooth while I latch it
Right, now I must move with the quickness
Here comes Shaheed so we must bear the witness

MCs like to meddle, but here's my proposition
I let my lyrics flow, and juxt your whole position
I'm radical with this like the man this song is after
Yo Tip settle down, whats the reason for the laughter?

I really can't say, I guess I laugh to keep from crying
So much going on, people killing, people dying
But I won't dwell on that, I think I'll elevate my mental
Thanks for these bars on the Biko instrumental

Yo I'll take it back, I'm the Indian giver
MCs take notes as I stand and deliver
Percussion isn't less, D's wear the vest
Why they dodging bullets, you should be dodging Quest
Dont get me wrong, violence is not our forte
I just like to rhyme, kick the lyric skills like Pele
Tip educate 'em, my rhymes are strictly taboo
Fill 'em with some fantasies and I'll look out like Tattoo

Ok, I am recognizing that the voice inside my head
Is urging me to be myself but never follow someone else
Because opinions are like voices, we all have a different kind
So just clean out all of your ears, these are my views and you will find
That we revolutionize over the kick and the snare
The ghetto vocalist is on a state-wide tear
Soon to be the continent and then the freaking globe
There's room for it all as we mingle at the ball
We welcome competition cos it doesn't make one lazy or worn
We gotta work hard, you know the damn card
Try to be the phattest is the level that we strive
Try to be the phattest also to stay alive