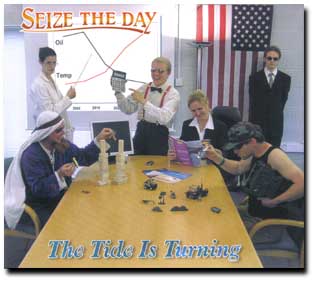 That tattoo on your granny`s forearm doesn`t tell it
Old maps of locomotive tracks cannot convey
And though I picture chimneystacks, I`ll never smell it
Or taste the anguish of the ones who got away
Your love had died, but you survived,
To dream a place that`s safe for you and all your kind.
Then you awoke to find that Zion was a nightmare
And you`re a prisoner - a prisoner of time - in Palestine

Between the golden beaches and the River Jordan,
A desert garden that they call the Holy Land
But if you spoke to Jesus, Moses or Mohammed,
This isn`t quite the paradise that they had planned;
How did the Promised Land of flowing milk and honey
Where three religions knelt before one living god
Become a place where flowing blood and foreign money
Oil the tank tracks where the gentle prophets trod?
Before they launched a jihad on the unbelievers,
Before they put the seed of Ishmael to the knife
Before the massacre of Sabra and Shatilla,
Before crusaders killed your kids then raped your wife
The God of Love was high above,
But here on earth the gods of hate were doing fine,
And if you cannot yet forgive them or forget them
You`re still a prisoner - a prisoner of time - in Palestine

That family farm that fed us 40 generations
Apparently was someone else`s before that
And now somebody from a European nation
Says someone else`s great grandchildren want it back!
So I must live beyond an artificial border
With neighbours who`d prefer that I did not exist;
They stole my olive orchard, then they stole the water,
And when I struggle with them, I`m the terrorist!
I had a baby, but a settler-bullet killed it,
I had a job, but now they`ve cordoned off the town,
I had a dream but every time I tried to build it
Somebody else comes with a tank and knocks it down
A young man`s pride, a suicide,
A Jewish bride and bridegroom bleeding where they dined,
And if you say “they`re not much better than the Nazis
You`re still a prisoner - a prisoner of time - in Palestine.

And if you thought that it was all about the Bible
Get with the history of a thousand years or two
It`s very nice to know you`re in the chosen people
‘Til you discover why it is they`ve chosen you,
To be the scapegoat when the rich demand a cutback
The one to blame when people cannot get enough
And when it`s not P.C. to use you for a punch bag
They`ll very kindly let you be their boxing glove

And so the Jews go on to kick the Palestinians
Because the rest of us have beaten up the Jews,
And for those oil-sheikh dictators it`s convenient
That they`ve an enemy in Israel to use.
So long as Abraham`s descendants are divided,
So long as grief between them builds a ghetto wall,
So long the camouflage and cover are provided
For what`s the greatest daylight robbery of all:
The praying presidents who heat the seat of power
The fossil traders who pollute the corridors,
The road of corpses laid from Tel Aviv to Basra
Keep up the pressure on that petrol pump of ours..
A fresh excuse for each abuse
Of terror and of counter-terror in our time,
How shall we change the climate globally for freedom?
While there are prisoners (of poverty and crime) in Palestine.

Those Palestinians They are my people!
But people cornered in a hell they didn`t choose.
How could I not support their fight for liberation
So they can live in dignity without abuse?
And those Israelis They are my people!
But people with a history they could not control.
Why would I not support their right to be a nation
And hold a homeland open for the Jewish soul?
The son of David in his armour-plated Zion,
Goliaths daughter reaching for another stone,
They`re gonna need a bit of help to tame the lion,
It isn`t fair to leave them struggling there alone
The God of Love may be above
But here on earth is where we make the love divine,
And when we see how each is captive to the other
We`ll free the prisoners and family of mine - in Palestine.