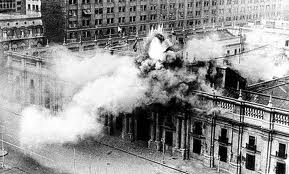 A song about the legitimate questions rarely heard in mainstream media about all 9/11s. There was one in 1973 in Chile, one in 1988 in Haiti and more, and the song reflects on the war crimes and terror that always seem to follow these 9/11 tragedies..

"I wrote this song originally in 2002 and then revised it in 2009. The song was inspired by journalists like Greg Palast, Amy Goodman, John Pilger and Robert Fisk, as well as the documentary filmmaker Michael Moore, all of whom asked tough questions and did exhaustive investigations into not only 9/11 but the state terrorism that followed.

It is all too often we hear only about our own 9/11, however there were many 9/11s. There was 9/11/88 in Haiti, 9/11/90 in Guatemala, and 9/11/73 in Chile. In all of these the US spy agencies' allies in those countries committed atrocities, assassinations, and coups overthrowing democratically elected leaders, like Salvador Allende in Chile in 1973. For those who believe "9/11 was an inside job" please ask yourselves this, where's the outside? A thorough look at history exposes that it frankly couldn't have been an outside job as there clearly is no longer an outside. Those who carried out the 9/11 attacks in 2001 are part of the same network of terrorists-for-hire who regularly work for these very military agencies of the USA and England, and allegedly they are doing so yet again in Libya today.

So don't just shout down "leftist gatekeepers" like Alex Jones always does so manipulatively assuming "truths" without evidence, but instead think about who is really behind all of this, everywhere, and why. Thank you".
Who's really running the country?
Who really says what goes?
Who's really getting that bailout money and
[who decides what the TV shows?

Who really murdered all those people?
What really brought the war home?
Why has there been no real investigation and
Where have all of the suspects really gone?

And why won't you admit they were wrong?

Who really funds operations?
Why block the FBI?
Why let your airplanes
cross the nation
Where no planes were allowed to fly?

Tell me why? Torture and lies!

Who's really dealing with the enemy?
Which back-room deal went south?
Who put all these dictators and terrorists in power
And who put the words in their mouth ?

Who's really building all the weapons?
Do they protect or threaten my home?
Are they really plotting all of these attacks and
[if so, why ever did we let them go it alone?

Who's really winning these elections?
Are they really free or fair?
Those who control it control who depends on it
Isn't that really why we're always over there?
Evoking that bloody nightmare?
But do we even care?..

Who really runs these illusions?
We can see the other side.
Is it for what you call "progress" that
[so many innocent people must die?

Who really funds operations ?
Why block the FBI ?
Why let your airplanes cross the oceans
Our flaming souls fall from the sky ?
Tell me why?
You always lie,
And we always die..!