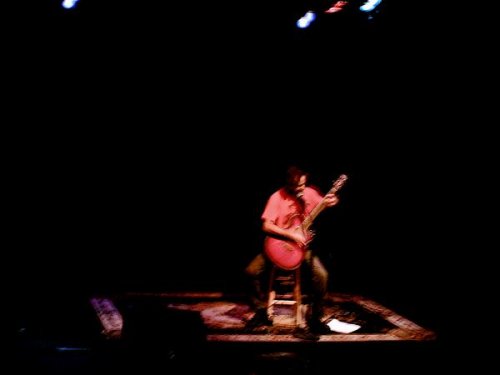 "I wrote this song about what I believe are the actual causes, not merely the positive correlations, the conditions, rational aspects, but the actual causes of war and acts of political violence. Have you ever accidentally given someone the "evil eye" and then been attacked by that person? Have you noticed in Greek tragedies and even Shakespeare that there is a recurring emphasis on the eyes and the tongue. The eyes gather information then used as ammunition fired by the tongue, more or less, to bring out a person's shame, humiliating them. Now consider what occurs when entire populations see their leader gazing down the "enemy" that they've rendered a scapegoat, then saying something wise, or for that matter "Presidential" sounding, and the other side of that signal, the threat perceived by those being cast as scapegoats. You can imagine how media plays a role in this phenomenon I'm sure".

This song was somewhat inspired by political researchers who study and advocate symbolic-choice theory as the explanation of why those who appear to be sane and rational people commit heinous acts of violence, especially in going to war or committing acts of terrorism or genocide. It was also inspired by a book "Violence: Reflections on a national epidemic", by James Gilligan, M.D. (1996). Gilligan was the director of the Center for the Study of Violence at Harvard Medical School, and was also the director of the Bridgewater State Hospital, the home for the "criminally insane". He also worked in the Massachusetts prison system.
The lips and the eyes
They symbolize the triggers
of unjustified retribution..

The lips and the eyes
Respectively devise
The demise of clear lines of communication..

The tongue is a gun
That fires ammunition
Made from observations visualizing
The trajectory's harm
It is humiliation
Compelling the weak and exposed
The emperor with no clothes
Then acts accordingly
On paranoid delusions
The result is only tragedy
and devastation
It is war.. and it's no solution..

(1) This song is not only about the psychology of violence in relation to war and repression etc., but also it is relevant in the many cases of violent acts committed by supposedly lone, crazed social delinquents. The notion that such people were simply crazy is an ignorant and thus incorrect notion. Someone lacking the capacity to think is unlikely to plot a successful act of violence, and assuming they're crazy is a way to avoid taking responsibility as a society. The culture here in the U.S. is extraordinarily violent, so much that - more broadly and realistically defined - most U.S.-cultured Americans appear to almost be instinctively prone to violence. In fact we are infatuated with those who can determine when violence can be justified, even if they really can't, and anticipate, with a thrill and excitement that can only translate to an arrogant zeal, the actual occurrence of violence. So much that FOX TV has built an industry on propagating acts of violence, washed by the endorsement of falsely prestigious institutions like the military and police departments, and justified by far-fetched hype and social myths. In the case of Jared Loughner consider that 'the tongue is a gun that fires ammunition made from observations visualizing the trajectory's harm', in other words he may well have felt he was defending himself against undetectable threats that appeared, to him at least, as being cast by those around him, and especially those over him. It is not as though the Obama administration and their lapdogs in the press didn't respond with hostility and incitement violence when Julian Assange drew the eyes of the world toward the U.S. military, energy industry, financial institutions and the like. "It is humiliation compelling the weak and exposed, the emperor with no clothes then acts accordingly". Loughner's behavior was predictable.