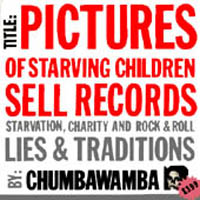 One, two, one, two, three, four
Things were rather different in great grandfather's day
He just put a chain around their ankles and made them work for no pay
He took everything they owned and yet still demanded more
He did a bloody good job in taming the poor
Now I'm rather more subtle, I say, I'll tell you what I will do
I'll do everything I can to try and help you
And you'll be helping me, I say, and I'll see that you're alright
You can have a place of your own, you can even pretend to be white
And you won't have to worry, I'll have a quiet word with your mates
Oh they'll be alright, they'll have enough on their plate
I'll put a bit in their mouths, you just pull hard on the reins
They'll do anything for you and they won't complain
You'll be so much better off, I say, you can share my paradise
Just sign my piece of paper and I'll organize your life
And it never fails, it does the trick, it works every time
So me and my dear wife and the family's doing fine

Great granddad got his dukedom when slavery was abolished
Dear old dad became a viscount when the Empire was finished
But times have changed for the better with freedom of choice
We're a thousand times richer, QED His Master's Voice
A dog stares into a gramophone trumpet, waits for its call to action
Mute and obedient, standing to attention
Look a little closer, the dog is a woman
She's working under a system that she can't understand
Trapped inside a world of labor and heat
So that she and her children will be able to eat
The trumpet is patriarchy, it's old and fixed
Where poor men are lured by desire to be rich
Where the limited power is still given to men
Where development aid is so wastefully spent
Where western education enforces this crap
Where women work in the open, yet live in a trap
There's one solution, and this is it
The dog leaps on the gramophone and has a shit