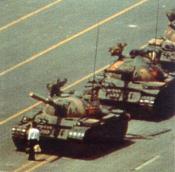 Tien An Men Square, 1989
The Place was China
And the year 1989
A Bunch of Students
Occupied a Square
In the Center of Town
Asking for no much
Than Peace and Democracy

But China is a Big Country
They don't want no Fucking
Pussy Democracy There...
So they sent: The Army