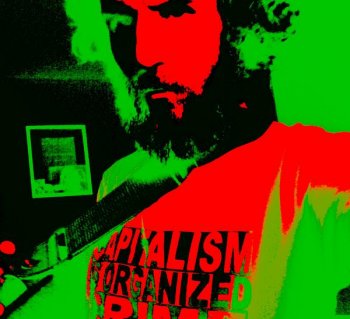 "..Ask Slavoj Žižek or Noam Chomsky, or somebody like that. I'm a songwriter, not a political analyst, nor a philosopher. At least, not explicitly. Anyways, capitalism is collapsing, enjoy!"
Capitalism
is the most advanced religion
until there is no more division of labor to exploit
We're so adroit but what's the point
smoke another joint
so you won't do more than feel bad about it
when all the stuff dries up you'll pray
for another profitable day when your rocket ships
lost in space
are landed on another unsuspecting race
who you can publicly disgrace
One hand puts a mask on their face
while the other one penetrates their soil
and unjust war spoils
but proportionality matters in the dimension of time as much as distance
in our parasitic ignorance
the life-span of a mosquito will only be that one very
profitable day..

Capitalism
another social construction
another calamity hiding behind ethnicity
the most audacious creed
the tent's pole is only greed
disguised as common
rationality
why can't we see our own insanity
it's an addiction this affliction is an illusion
an elaborate painting of progress
until death
but in reality all ecology is an economy pissed away for its
least valuable commodity
that's anything but free
those of whom we deceive
is everything that breaths
or breeds
so don't let your children see
too much of your hypocrisy
or they might comprehend your greed
as that which actually
left them with absolutely nothing..