President Ulysses S. Grant placed general George R. Crook in command of the Arizona Territory after his successful campaign in the Pacific Northwest.. Crook used of Apache scouts (sic) in order to force the Chiricahuas under chief Cochise onto reservations. In the 1870's Crook was chasing Geronimo, when an offer came in to "parley" with him... but Crook and only three men had to agree to go unarmed, over 200 miles of Apache territory.. 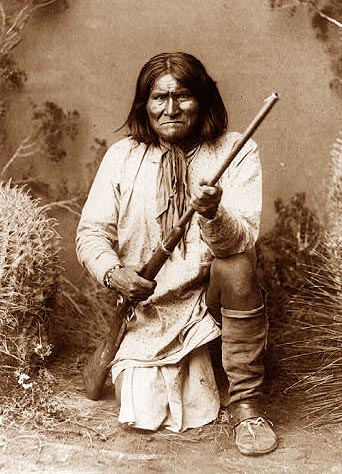 Geronimo
General Crook was quite a soldier in his own straightforward way
He had earned respect from many different clans..
Arizona Territory was a dangerous place
He was posted here to capture renegade bands.

With his number-one man Cooley, ever farther from their home
And two scouts from mountain Fort Apache lands
They were traveling hostile country, some folks said they were insane
To parley with Geronimo, two warriors, man-to-man...
–and they were ridin' in alone.

Riding slowly down a narrow canyon – unfamiliar ground
Saw the sentries standing high above their eyes..
There was plenty firepower scattered all around
They'd agreed to come unarmed – a compromise
And they were ridin' in alone.

Geronimo sat and smoked with them -and talked good talk that night
Crook and Cooley listened carefully
He agreed to certain terms then he's give up his fight
The General said: "Washington might not agree with me."
-And they rode safely out alone.