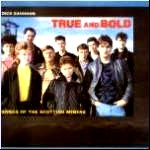 “Written at the end of the 1984/85 Miners' Strike in the UK for the Lothian Victimised Miners, most of whom were friends of mine, who lost their jobs as a result of their part in the strike. Davie Hamilton (now an MP) was the Chair of the Lothian Miner's Central Strike Committee - he spent 3 months in Saughton Prison after being arrested while trying to get medical assistance for an injured picket. He also lost his job.
Malcolm Pitt was the Area president of the Kent National Union of Mineworkers and was also arrested and imprisoned on a trivial charge.
At the time of the strike Arthur Scargill was the National President of the NUM, Peter Heathfield was General Secretary, and Mick McGahey was National Vice-President and Scottish Area President.
Ian MacGregor was an American hitman brought in by the Thatcher Government as head of the National Coal Board to enforce Conservative political dogma in the coal industry. He was later rewarded by being made Sir Ian. I am ashamed to say he was of Scots origins, as his name indicates.” (Dick Gaughan)

A proposito del grande sciopero dei minatori britannici nel 1984/1985 si veda anche 1984
Come gather round me people and I'll sing to you a song
About a famous battle that went on for so long
It's a tale of grief and courage of pain and bravery
One of the finest pages written in our history
We all know songs that tell of workers' struggles long ago
Of UCS, Tolpuddle, Shrewsbury, Pentonville and so I'm here
To sing to you the praises of the women and the men
Who dared the might of Tory spite the future to defend

Twas in March of 1984 the gauntlet was thrown down
When MacGregor told the NUM, "These pits are closing down"
"Och, get on your bike, MacGregor", the miners' answer came
"We fought the Board in 74 and we'll fight you once again"
From S Wales across to Yorkshire, from Scotland down to Kent
The miners showed the NCB that what they said, they meant
Except the scabs who sold their future out to Thatcher and her gang
And turned traitor to their class, their names forever damned

In Fleet Street and in Downing Street, a wondrous sight was seen
New-found converts to democracy soon all began to scream
"You can't strike without a ballot", well-fed mouths were heard to bleat,
"You won't ballot us out of our jobs, we're voting with our feet"
Soon armies of blue uniforms were marching through the land
With horses, dogs and riot shields and truncheons in both hands
But the miners took on everything the government could throw
And went back again to battle on with shouts of "Here we go!"

Let's pause here to remember the men who gave their lives
Joe Green and David Jones were killed in fighting for their rights
But their courage and their sacrifice we never will forget
And we won't forget the reason, too, they met an early death
For the strikebreakers in uniforms were many thousand strong
And any picket who was in the way was battered to the ground
With police vans driving into them and truncheons on the head
It's just a bloody miracle that hundreds more aren't dead

So here's to Arthur Scargill, Heathfield and McGahey too
Who led the strike together in defence of me and you
And Malcolm Pitt and Davie Hamilton and the rest of them as well
Who were torn from home and family and locked in prison cells
But the battle will go on until the working class has won
For the right to work and decent lives belongs to everyone
We'll go forward now in unity, let's share the miners' load
There can only be one answer - socialism, here we go!