Lyrics by Vicki Ryder
Tune: “I’ve Been Workin’ on the Railroad”

Vicki Ryder wrote this song for the Raging Grannies, who performed it at the anti-war rally in Washington, DC, on September 24, 2005. 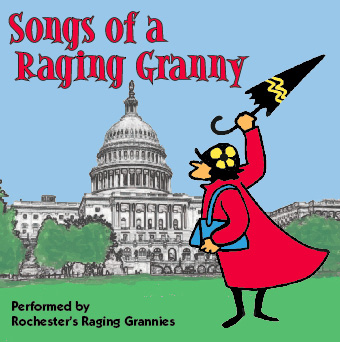 Cindy Sheehan went to Texas
With questions for the prez:
Just what did her dear son die for?
“It’s a noble cause,” he said.
But nineteen hundred sons and daughters
Have died for Bush’s lies,
And thousands more are dying here at home.
It’s time to organize!

Our National Guard’s defending freedom,
Or so dear Georgie said.
But folks are dying in New Orleans
And kids are underfed.
Georgie had a five-week rest break;
It’s different in Iraq,
Where there's no break from all the dying there.
It’s time to bring them back!
CHORUS