Wishing The Brits Would Go Home 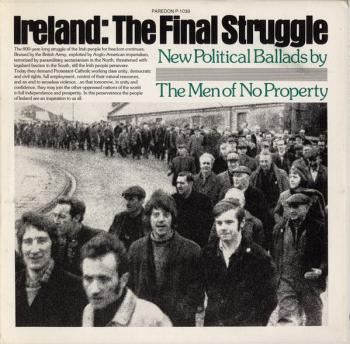 It was six years in August they come here among us.
Some brought them for supper in out of the rain.
Oh they must have been barmy to welcome the army,
And now wish that the troops would go buck home again.

Go out for a wander, they’re down at the corner,
Hands up til they search you, it’s always the same.
I’ve done it that often me head’s goin’ soft, and
I wish that the troops would go back home again!

Each four months they’re over, be they drunk or sober,
On peace-keeping duties, the government’s claim.
Far better at lootin’ and poor-people shootin’,
I wish that the troops would go back home again.

Joined up with the hope of adventure and travel,
Black Watch and the Gloucesters, the Paras the same,
With black dirt on their faces, the exotic places
They’ll see is damn few ‘till they’re back home again.

They go down to the border, come back a few shorter.
No palm trees and surfing down by Cross Maglen.
By each shadow haunted, and know they're not wanted,
And all wish to bejesus they were back home again.

So come every soldier, be sure I have told you,
The people in this country hold you for to blame.
If its flying or rowing, as long as you’re going,
And never come back to old Ireland again!