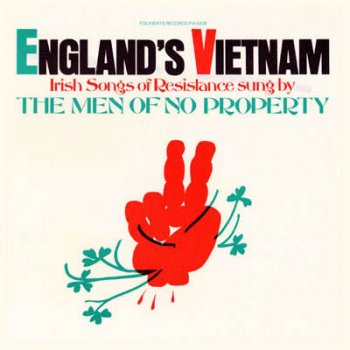 The song tells of the anguish of the internee's wife, as she watches her husband being dragged from their bed and brought to Long Kesh, there to be held in a barbed wire cage without charge or trial for an indefinite period. As she watches the politicians selling out she comes to the conclusion that it will take more than words to end the repression of a State guilty of such inhuman behaviour. Now, in May 1975 despite Merlyn Rees' pathetic lies [Lord Merlyn-Rees, labourista, segretario di Stato per il Nord Irlanda tra il 1974 e il 1976, ndr] over 300 Republicans are in Long Kesh.
(Nota dal libretto che accompagna il disco)
It was four o'clock in the morning when they dragged him from his bed,
They dragged him to their lorry, and not a word they said,
They brought him to their barracks, they tortured him for days
To break his mind and body, they tried many awful ways.

He lies behind a barbed wire fence in a concentration camp,
He's guarded there by men and dogs a foreign country sent.
No judge or jury tried him, of no crime he is accused,
How long they hold him prisoner, to tell me they've refused.

Each time I make the journey to the place where he is held,
By rough hands of foreign soldiers to the search I am compelled.
I watch him growing weaker, his strength fades every day,
To free him and his brothers we'll have to find a way.

I watch the politicians as they use him like a pawn,
Furthering their own careers, how long must it go on?
I've come to know his jailers, I know what must be done,
The only voice they'll listen to is from behind a gun