The Parade's Still Passing By 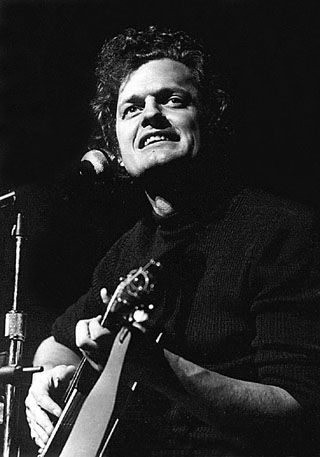 Una canzone dedicata a Phil Ochs a pochi mesi dalla sua morte, con particolare riferimento a One More Parade. Anche il suo autore, Harry Chapin, sarebbe morto tragicamente (in un incidente stradale) di lì a pochi anni, nel 1981.
I got the news today
That you refused to play
Cause you never made number one
But it's not just the words
It's the deeds that are heard
When all is said and done
Kings take their crowns
They melt them all down
Trying to get the gold out
You went to hell and
Even when you weren't selling
You never ever sold out.

You weren't no leader,
You were more like a bleeder
Who was trying to cry for us all
You weren't no sage
But your sense of outrage
Sounded like a trumpet call
Fifteen years ago
In the old folky show
You were just one voice in the crowd
But now with so few singing
Your voice would have been ringing
Out 'bout twice as loud.

There but for fortune
Say a small circle of friends
Some may see the changes
So few see the ends
The pleasures of the harbor
Have come to you at last
You may not be marching anymore
But the parade's still going past.

I'm not taking the blame
That we killed you
You know you did that to yourself
But it was kind of a shame
That you played that game
You were better than anyone else
One shot of your bottle
Got you full throttle
It was the friend that was always there
But your greatest gift
And the curse you lived with
Was that you could always care.