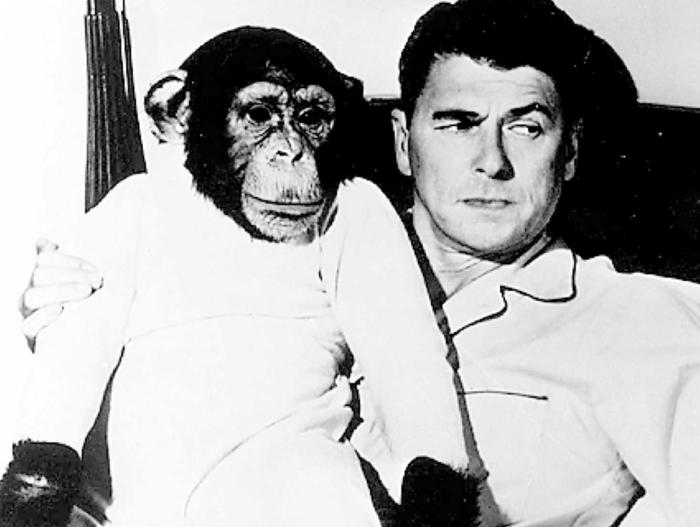 The election of Ronald Reagan to President of the USA and subsequent swing to the political right horrified many people. "Bed-Time for Bonzo": One of Reagan's last movies in which his co-star, a chimpanzee named Bonzo, was the better actor. Great Britain under the leadership of Margaret Thatcher became little more than just another State of America.

The paranoia of the McCarthy era surfaced again with the administration's determination to rid the world of the red menace aboard. The origins of crack cocaine in California was traced back to the Contras, a guerrilla force backed by the Reagan administration that attacked Nicaragua's Sandinista government during the 1980s. Payment were made to drug traffickers by the U.S. State Department from funds authorised by the Congress for "humanitarian assistance" to the Contras. In some cases after the traffickers had been indicted by federal law enforcement agencies on drug charges, in others while traffickers were under active investigation by these same agencies. These activities were carried out in connection with Contra activities in both Costa Rica and Honduras.

Even the swingers of the permissive 60's are suddenly swerving to the right. At prime time the vigilantes are appearing in programmes about the "good fight", while the day begins with a triple "K". (The Klu Klux Klan.) There's no sponsored programme for the sinners, instead they're bringing back the electric chair. (The "hot seat".)
What's keeping the White House white
Is it chalk, Is it fog, Is it fear?
Are they staying up most of the night
And sending somebody out for a beer?
Is it bed-time for Bonzo?
Is it time for a change?
Is it flavour-free TV dinners?
It's a hard thing to take, when they make a mistake
America for Beginners.

The sound of a bell with a crack
Even the swingers are swinging right
The vigilantes are on the way back
With prime-time 'fight the good fight'.
What a start to a day
It starts three times with a "K"
There's no sponsored hour for sinners
They'll bring back the hot seat
And turn up the heat
America for Beginners

You wear designer jeans after dark
And your shirts are sharp-cut in satin
But won't you watch out for Central Park
And apartments in uptown Manhattan.
It's a sign of the times
Better stay out in front
Because they've only got time for winners.
Just keep living for fun, you son of a gun
America for Beginners.

Everywhere there's stripes and stars
Men in dark suits in unmarked cars
Sipping Jack Daniels in Third World bars
They're close to the edge.
They're as close as you can get.