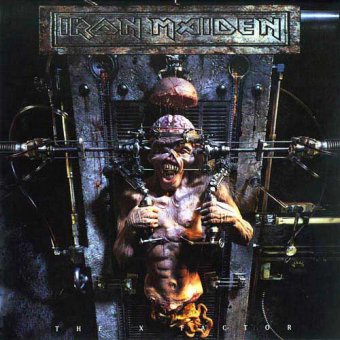 The tour for the album, like the tour for their next album, Virtual XI, was cut short after Blaze suffered a violent allergic reaction to certain elements used on the stages where the band performed.

The album cover depicts the operation which left Eddie's head broken (first seen on the Piece of Mind album cover) and was done by Hugh Syme. In some releases, the cover was replaced with a less graphic alternative, showing Eddie from a distance, with the original artwork on the back of the booklet.

This is the second album after Piece of Mind that was not named after a song on the album. The words The X Factor do not appear in any of song's lyrics.

"Man on the Edge" and "Lord of the Flies" were released as singles. Both of these songs, and "Sign of the Cross", remained in Maiden setlists following Bruce Dickinson's return. Live versions of these songs can be found on the single for "The Wicker Man" "Death on the Road", and "Rock in Rio", respectively.

When you can see it happening
The madness that's all around you
Nobody seems to worry
The World seens so powerless to act ...

Another assassination
The same day a new creation
But what are they coming into
Security of a world that brings ...

Brutality and aggression
Tomorrow another lesson
Expecting another air raid
Praying for a ceasefire ...