Racism and Slavery in the USA
[1965]
Dall'album "Violets Of Dawn" 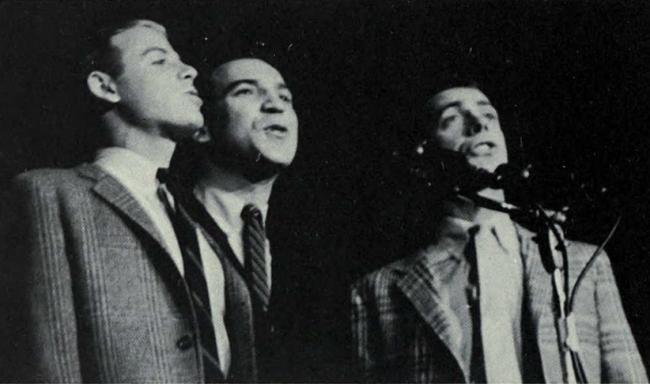 Una canzone contro gli alfieri del segregazionismo americano, nel tipico stile satirico e parodistico del Chad Mitchell Trio.
Is there a klavern in your town? (In your town)
If not, then why not have us down? (Have us down)

You'll never recognize us, there's a smile upon our face
We're changin' all our dirty sheets and a cleanin' up the place
Yep, since we got a lawyer and a public relations man
We're your friendly, liberal, neighborhood Ku Klux Klan

Yes, we're your friendly, liberal, neighborhood Ku Klux Klan
Ever since we got that lawyer and that public relations man
'Cause we did shoot one reporter, but he was just obscene
And you can't call us no filthy names - What does Anglo-Saxon mean?

Allemande left, allemande right, the Ladies' Auxiliary is meetin' tonight
'Cause the Klan's collected so much cash that now, by gum, we're rich white trash!

Now, we've heard it said our leadership's not qualified to lead
Well I'm tellin' you that just ain't true - Why three of them can read
Take our Grand Exalted Dragon, now some folks think he's bad
Well, you should meet his sweet old mother, and her brother, who's his dad

Yes, they're your friendly, liberal, neighborhood Ku Klux Klan
And he's gonna run for governor soon as he's out of the can
We're all from fine old families, the pride of all these hills
Yes, seven generations at the same old illegal stills

Had a little rally the other night, shot up town in a fury
Luke's arrested, Pa's on trial, and the rest of us are on the jury

Now, we've heard them call us deadbeats, and we'd like to say we're not
We'll all stand on our record, and that's one thing we've all got
And we only have that arsenal so that you won't raise no fuss
And if you don't like that, then call the cops, 'cause the chances are, they're us

Yes we're your friendly, liberal, neighborhood Ku Klux Klan
But somehow we went from the fire to the fryin' pan
We never learned to hold a job, and we never learned to write
But boy, we sure have learned the ropes, 'cause we use them every night

Now, we're out to show the Congress that we're all so nice and meek
Why we never even take the Fifth, 'cause we drank that all last week
And you'll never hear us shootin' or hangin' people high
'Cause we're learnin' to respect the law and to have an alibi

And, those dirty, lyin' witnesses, Lord, forgive them what they speak
We would go to church and pray for them... 'cept we blew it up last week