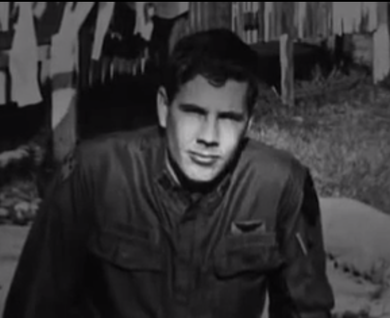 Then one circled down to a place on the ground
Where there were children who were wounded and crying.
And he took them in the chopper to take the kids out
So that they wouldn't be among the dying.

They were on their way out when below them they saw
A little two year old baby
So they went down again and the pilot got out
Muttering "The whole world has gone crazy."

The baby was cradled in the Captain's arms
Wounded and crying and bloody
When a Lieutenant came up and said "Put the kid down
And get your chopper on out of here, buddy."

The Captain looked down at the Lieutenant's gun
That was smoky and hot from the killing.
He said "If I have to give my life for this child,
Then, by God, you know that I'm willing."

Then the gunner who stood in the helicopter's door
Called out to the Lieutenant,
"We're calling your bluff. There's been killing enough.
If your gun starts more, mine will end it."

So they flew the kids out to the medics who said,
"War is hell. Even babies get wounded."
The pilot just looked at his gunner and shook.
Said "To kill them was what was intended."

As they flew over Pinkville, the choppers could see,
The slaughter that went on below them.
And they radioed the dying of the women and kids,
So that general headquarters would know them. 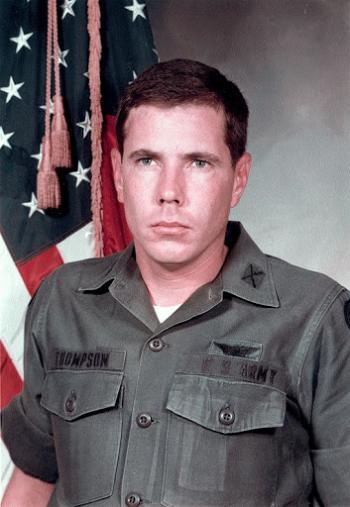 US Army Warrant Officer and Helicopter Pilot; he was honored for rescuing Vietnamese civilians from his fellow soldiers during the 1968 My Lai massacre, and for bringing the massacre to a halt. Born in Atlanta, Georgia, he joined the Navy in 1961, and upon completion of his Navy term of service, joined the US Army in 1966, to become a helicopter pilot. He volunteered for the Vietnam Aerial Scout Unit, and was assigned to Task Force Barker to fly over the jungle to draw enemy fire, giving attack helicopters a chance to kill enemy forces. On the morning of 16 March 1968, Thompson was piloting an OH-23 helicopter, when they came upon American ground troops killing Vietnamese civilians around the village of My Lai. To prevent more killings, he landed his helicopter between a group of Vietnamese civilians and the soldiers, ordering his door gunner to fire on the soldiers if they attempted to kill the civilians. He then evacuated the civilians, including a 2-year-old boy that he found clinging to his dead mother. He ordered two other helicopters to fly eleven Vietnamese to the hospital at Quang Ngai, then reported the massacre to higher headquarters, and got a cease-fire declared, sparing countless more civilians. Despite his efforts, approximately 500 Vietnamese were murdered in the massacre, which resulted in the later court-martial of 1st Lt. William Calley, the sole officer convicted for the massacre. For the remainder of his tour, he continued to fly OH-23 helicopters, and was shot down five times, the last time breaking his back. He remained another 13 years in the Army, retiring in 1982, then became a counselor at the Louisiana Dept of Veterans Affairs. He would periodically go to West Point to give a personal lecture to the cadets on military ethics. When Thompson's role in preventing loss of life became known, the Army in 1998 awarded him the Soldier's Medal (the highest award for valor not involving combat). He died at the Veterans Affairs Medical Center in Alexandria, Louisiana on January 6, 2006, from cancer.