One Morning A Jew Went Out Into The Street 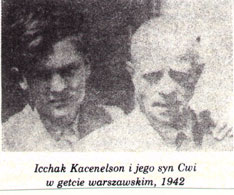 
The song, under the title "Folk-tune of 1940," was published with the music in the underground newspaper "Dror," Warsaw, 1940.

Okentshe, Dinasi and Sejm are places in Warsaw where Jews were sentenced to hard labor and tortured.

L'originale della canzone è ovviamente in lingua yiddish, ma siamo riusciti a reperire solamente questa traduzione inglese (in rima e cantabile) da questa pagina.
One morning a Jew went out into the street -
O tell me what happened, my brethren,
Just why is it wet on the sand at your feet
On the road that leads out to Okentshe?

One Jew then another went out for a walk -
O listen, my laddy, my lassy -
The burning hot blood on the road seems to talk
On the way that approaches Dinasi.

A Jew went out early, from home did he go,
And never came back nor was seen more -
It was winter then, with its cold and its snow,
And now already it's summer.

It was not dipped in salt, yet how salty the bread -
O see our tears falling in sorrow -
Is Father still living? Perhaps he is dead?
And who will be taken tomorrow?

Today I was caught and dragged off to the Sejm,
All beaten and bleeding I languish,
But at home they know well of that terrible name
So don't tell them, spare them the anguish.

Some young little ruffians smash windows and rob,
Two Germans, their guardians, stand dreaming;
A photographer captures the Jew and the mob -
It'll be in the "Sturmer" next morning.

Each day and its mishap - a paper that thirsts
For blood of the Jews, it incites them -
Der Jude! Der Jude! He's exiled and cursed,
To harass the Jews it invites them.

O weep not! A shadow moves on through the night,
Its face like a mask, no word spoken -
A heart or a stone? O G-d, in Thy sight
The patch on its arm is a token.