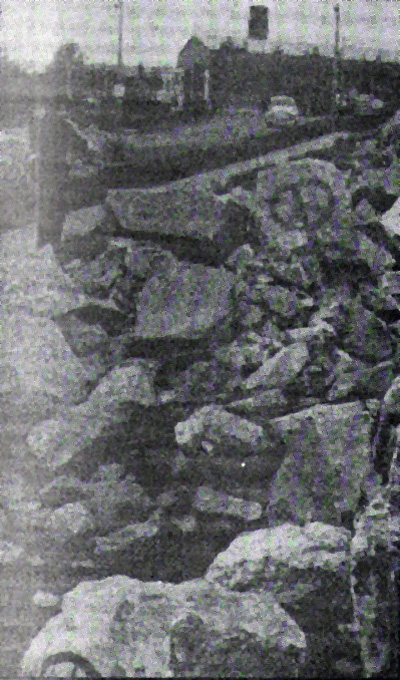 No information about author.
Music: Leon Russelson: The World Turned Upside Down.

September 28, 1981: Second eviction. M.O.T. dumps thousnds of rocks over camp to prevent women from returning. Camp begin again on original piece of council land. Source: The Greenham factor. Picture source: Atomraketter i Europa! No, No, No... Historier fra Sicilien, England og Tyskland. - Ulfborg : Landsforeningen Danmark mod krig, 1982. p. 25. (Poor print)
In 1981 to Greenham
a band of women with their children
came to claim the women's space
they defied the government
they defied the laws
They were the peacemakers reclaiming what was theirs.

We came in peace they said
The truth to show
We come to stop your nuclear madness
and to make the common grow
This earth divided
We will make whole
So it will be a common treasury for all.

Your wealth and weapons, we disdain
we will not let you our earth
a wasteland with your nuclear games.
We'll stop your arms trade, your thefts and lies
We'll feed the hungry
Women of the world with rise.

You've make your laws to bind us well,
When we protest against your murders
Then you lock us in a cell
We won't obey your mad commands
We wan't be silent as you try to rape our lands.

We work we eat together, we laugh and love
We share the earth, her fruits and flowers
and the sun and the moon above
We are the women angry and strong
We are the misfits of the world
Where right is wrong.

From the US Military the orders came
So Newbury council sent its bullies
Whom the futur will condam
They have destroyed our benders, they come each day
but bailiffs have no power when women want to stay.

You poor take courage, you rich take care
for life the earth and our survival
Here is nothing we won't dare
The common spirit empowers us all
You Greenham women of the world we shall prevail.