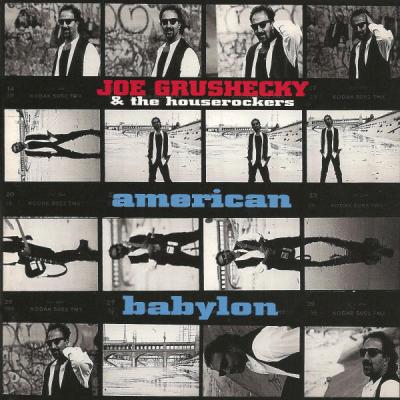 The above lyrics are for Joe Grushecky & The Houserockers' album version of TALKING TO THE KING as released in 1995.

In late October and early November 1993, Bruce Springsteen (with Toby Scott recording and Bob Clearmountain mixing) produced a recording session for Joe Grushecky at Thrill Hill Recording (Springsteen's home studio) in Beverly Hills, CA. Off the session, two tracks would be released on Grushecky's next album, American Babylon: CHAIN SMOKIN' and NEVER BE ENOUGH TIME. Springsteen played guitars, keyboard, and percussion on the first track, and guitar on the second. In addition to Springsteen, Grushecky's backing band for this session consisted of musicians organized by Springsteen that he is believed to have utilized for some of his own scattered studio sessions during the period: Zack Alford on drums, Jerome Smith on bass, and Leon Pendarvis on keyboards. Although originally planned as a "one-off", this session with Grushecky turned out to be the start of a major side project undertaking for Springsteen.

Around February 1994, Springsteen (with Toby Scott recording and Bob Clearmountain mixing) produced a further recording session for Joe Grushecky at Thrill Hill Recording. Off the session, one track would be released on American Babylon: HOMESTEAD, a song Springsteen and Grushecky had co-written together during the previous few months. Springsteen played guitar, harmonica, and mandolin on the track. In addition to Springsteen, Grushecky's backing band for this session consisted of musicians organized by Springsteen that he was utilizing for his own scattered studio sessions of the period: Shayne Fontaine on guitar, Zack Alford on drums, TM Stevens on bass, and Leon Pendarvis on keyboards.

Around October 1994, Springsteen (with Toby Scott recording and mixing) produced a further recording session for Joe Grushecky at Thrill Hill Recording. Off the session, three tracks would be released on American Babylon: COMIN' DOWN MARIA, TALK SHOW, and NO STRINGS ATTACHED. The Houserockers were again the session's backing band. But contrary to previous sessions, Springsteen did not play on any of these three recordings, although his wife Patti Scialfa provided backing vocals on the first track.

Although the album was essentially completed at this stage, and filed with the US Copyright Office on 13 Dec 1994, Grushecky had trouble finding an interested record company. "We got turned down by everybody, I mean everybody. That's another reason why it took so long [for release]; I didn't have any funding," Grushecky commented in an interview. "Right around the turn of the year [Dec 1994 - Jan 1995] Pinnacle UK became involved and we knew we had a home for the project".

The final overdubbing/mixing sessions for American Babylon took place around April 1995 at Thrill Hill Recording, and the album was released in October 1995 on Pinnacle Records, and reissued in 2004. The album's title track, AMERICAN BABYLON, is the only one not produced by Bruce Springsteen.