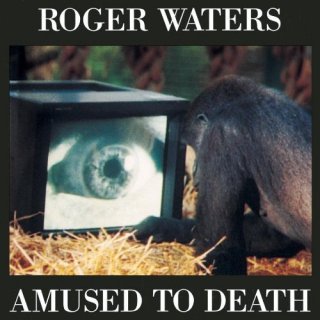 "Amused to Death" is a concept album released by Roger Waters in 1992. The album title was attached to material that Waters began working on during the Radio KAOS tour. A prototype album cover was reportedly distributed to his record company, which included caricatures of three figures resembling David Gilmour, Nick Mason, and Richard Wright, floating in a martini glass. However, it was several years before the album was finally released (Roger refused to release it as long as his former bandmates were still on Columbia Records' roster), and it is unknown how much the material was changed in the interim. At the very least, the songs criticizing the first Gulf War, George Bush senior and Tiananmen Square were new or heavily rewritten, as those events occurred after the original writing.
In Neil Postman's book The End of Education, he remarks on the album: "(...) Roger Waters, once the lead singer of Pink Floyd, was sufficiently inspired by a book of mine to produce a CD called Amused to Death. This fact so elevated my prestige among undergraduates that I am hardly in a position to repudiate him or his kind of music."
Waters stated in an interview with Rockline on 8 February 1993 that he wanted to use samples of HAL 9000 from 2001: A Space Odyssey on the album. Stanley Kubrick, the director, turned him down on the basis that it would open the door to many other people using the sound sample. He has since then used audio of HAL describing his mind being taken away when performing the song live (as an intro, specifically during his In the Flesh concert tour, after Kubrick's death).
Amused to Death further explores Waters' disillusionment with modern Western society, focusing specifically on the influence of television and the mass media. The album was inspired by the book Amusing Ourselves to Death, a critique of television and its related culture by Neil Postman. Continuing Waters' trend of having well known guest guitarists featured on his solo albums, Amused to Death features Jeff Beck on lead guitar.

Ooh, western woman,
Ooh, western girl
News hound sniffs the air
When Jessica Hahn goes down
He latches on to that symbol of detachment
Attracted by – the peeling away of feeling
The celebrity -of the abused shell the belle..

And the children of Melrose Strut their stuff
Is absolute zero cold enough
And out in the valley -warm and clean
The little ones sit by their TV screens
No thoughts to think,
No tears to cry..

All sucked dry -down to the very last breath
Bartender what is wrong with me
Why I am so out of breath
The captain said: – Excuse me ma'am
This species has amused itself to death..

We watched the tragedy unfold
We did as we were told
We bought and sold
It was the greatest show on Earth
But then it was over
We oohed and aahed
We drove our racing cars..
We ate our last few jars of caviar
And somewhere out there in the stars
A keen-eyed look-out
Spied a flickering light..

Amused itself to death…

[Switch Channels]
[Alf Razzell:]
"Years later, I saw Bill Hubbard's name on the memorial to the missing
at Aras.. And I...when I saw his name I was absolutely transfixed; it
was as though he was now a human being instead of some sort of
nightmarish memory of how I had to leave him, all those years ago.
And I felt relieved, and ever since then I've felt happier about it,
because always before, whenever I thought of him, I said to myself,
'Was there something else that I could have done?'
[Background: "I'd rather die, I'd rather die..."]
And that always sort of worried me. And having seen him, and his
name in the register - as you know in the memorials there's a little safe,
there's a register in there with every name - and seeing his name and
his name on the memorial; it sort of lightened my...heart, if you like."
[Woman:] "When was it that you saw his name on the memorial?"
"Ah, when I was eighty-seven, that would be a year, ninete...eighty-
four, nineteen eighty-four.."