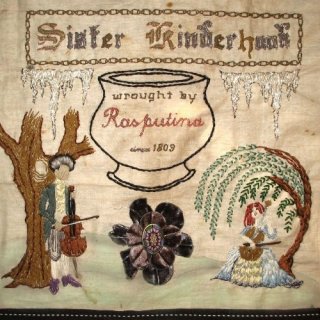 The album revolves around a fantastical theme that explores subject matter such as the New Netherland settlements, Colonial Federalism, feral children, the Anti-Rent Wars of 1844 (1), Early American portraiture, and the prehistoric Mound Builder giants of Illinois and Ohio.
Oh how we used to hate the sight
Of the evil rent collector coming in the night
Got to tied for 40 bushels, but it don't seem right
Up to the manor house to pay the Great Patroon

These Indians wore Calico dresses
They were belted at the waist
Red flannel pantaloons or
Those masks ..... looking things
With fringe around the neck
Horns upon their forehead
Course animal hair put on for a beard
At the pow-wow among the grotesque
The chief wore a striped calico young lady's dress

Blow on the tin dinner horn over the valley
Call all the formerly normal men to revolt and rally
The Feudal Land Laws should be abolished
What are you waiting for? it's 1844!
The worm has begun to turn

I saw those Calicos scorn and spurn their accusers
With threatening talk and rough, tough threatening gestures
The feeling was stronger and stronger
(Stronger and stronger)
They tried to talk like real Indians might:
"Me want cider" and the like
Many a head had worn this crown of feathers
I tried to be the leader of the Anti-Rent Rioters
I recognized it as having belonged to a left-handed neighbor
Ooh a little Indian man called Sander ....

Blow the tin dinner horn over the valley
Call all the formerly normal men to revolt and rally
The Feudal Land Laws should be abolished
What are you waiting for, it's 1844?
The worm has begun to turn

(1) The Anti-Rent War (also known as the Helderberg War) was a tenants' revolt in upstate New York during the early 19th century, beginning with the death of Stephen Van Rensselaer III in 1839.

There is also the 1766 Anti-Rent war of Dutchess County which was provoked by similar land-title problems.

Before the American Revolutionary War, the patroons acted as feudal lords, with the right to make laws. The Anti-Rent War led to the creation of the Antirenter Party which had a strong influence on New York State politics from 1846 to 1851.

The first mass meeting of tenant farmers leading to the Anti-Rent War was held in Berne, New York on July 4, 1839. In January, 1845 one hundred and fifty delegates from eleven counties assembled in St. Paul's Lutheran Church, Berne to call for political action to redress their grievances.

Trials of leaders of the revolt for riot, conspiracy and robbery were held in 1845. Participants as counsel in the trials included Ambrose L. Jordan, as leading counsel for the defense and John Van Buren, the state attorney general, who personally conducted the prosecution. At the first trial the jury came to no conclusion. During a re-trial in September 1845, the two leading counsels started a fist-fight in open court. Both were sentenced by the presiding judge, Justice John W. Edmonds, to "solitary confinement in the county jail for 24 hours." At the conclusion of the trial, one defendant, Smith A. Boughton, was sentenced to life imprisonment, but after the election of John Young, who had the support of the Anti-Renters, Broughton was pardoned.