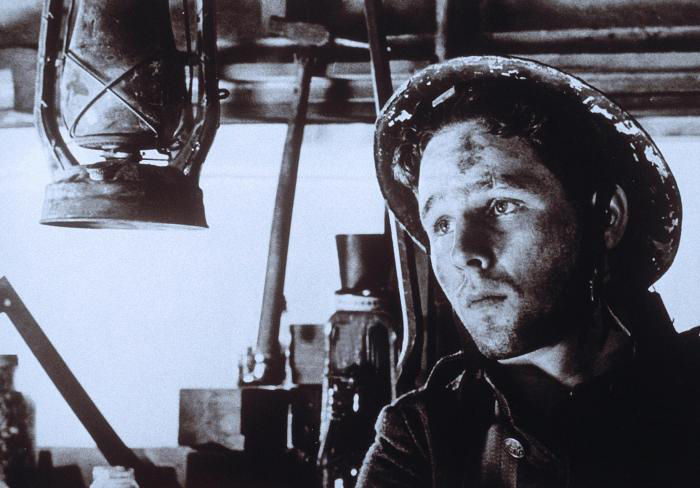 
For this definitely historic page of this website, everybody would maybe expect bombastic discourses, proclamations, reports and so on. Nothing of all this. Only few words, and very simple. As a counterpart to the first AWS, Le Déserteur, the best known antiwar song of all times, we include now here -10,000 songs later- the final part of one of the most celebrated antimilitarist and antiwar novels: Johnny Got His Gun by Dalton Trumbo. So, a circle of ten thousand songs and TEN THOUSAND NOS is going to be closed. But we will keep on up to 100,000, if need be and if we have the force. We will not give up being a thorn in your side, so far we can. Without a break. It's enough, and please carefully read Dalton Trumbo's words, even if you already know them. Yes, a special page, and so highly special, that it does not need anything but a number: 10,000. We do not need telling you our (hi)story again: everybody can see it, every day, in every song. 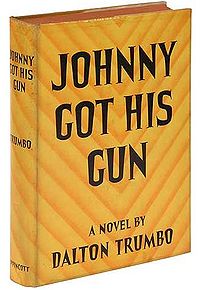 Dalton Trumbo (December 9, 1905 – September 10, 1976) was an American screenwriter and novelist, and one of the Hollywood Ten, a group of film professionals who testified before the House Un-American Activities Committee (HUAC) in 1947 during the committee's investigation of Communist influences in the motion picture industry. Trumbo was born in Montrose, Colorado, and graduated from Grand Junction High School. While still in high school, he worked as a cub reporter for the Grand Junction Daily Sentinel, covering courts, the high school, the mortuary and civic organizations. He attended the University of Colorado for two years (the central fountain at the University was named the Dalton Trumbo Free Speech Fountain in his honor in the mid-1990s), working as a reporter for the Boulder Daily Camera and contributing to the campus humor magazine, the yearbook and the campus newspaper. He got his start working for Vogue magazine. His first published novel, "Eclipse" was about a town and its people, written in the social realist style, and drew on his years in Grand Junction. He started in movies in 1937; by the 1940s, he was one of Hollywood's highest paid writers for work on such films as Thirty Seconds Over Tokyo (1944), and Our Vines Have Tender Grapes (1945), and Kitty Foyle (1940), for which he was nominated for an Academy Award for Writing Adapted Screenplay. Trumbo's 1939 anti-war novel, Johnny Got His Gun, won a National Book Award (then known as an American Book Sellers Award) that year. The novel was inspired by an article Trumbo read about a soldier who was horribly disfigured during World War I. Trumbo aligned himself with the Communist Party USA before the 1940s, although he did not join the party until later. After the outbreak of World War II in 1939, American communists argued that the United States should not get involved in the war on the side of Great Britain, since the Molotov-Ribbentrop Pact of nonaggression meant that the Soviet Union was at peace with Germany. In 1941, Trumbo wrote a novel The Remarkable Andrew, in which, in one scene, the ghost of Andrew Jackson appears in order to caution the United States not to get involved in the war. In a review of the book, Time Magazine sarcastically wrote, "General Jackson's opinions need surprise no one who has observed George Washington and Abraham Lincoln zealously following the Communist Party Line in recent years." Shortly after the 1941 German invasion of the Soviet Union, Trumbo and his publishers decided to suspend reprinting of Johnny Got His Gun until the end of the war. After receiving letters from individuals, including pacifists, isolationists, as well as those with apparent ties to Nazis requesting copies of the book, Trumbo contacted the FBI and turned these letters over to them. Thus did Trumbo, in effect, "named names", something that would come back to haunt him years later when others would name him before the House Un-American Committee. Trumbo regretted this decision, which he called "foolish", after two FBI agents showed up at his home and it became clear that "their interest lay not in the letters but in me." Trumbo was a member of the Communist Party USA from 1943 until 1948. He bragged in The Daily Worker that among the films that communist influence in Hollywood had quashed were adaptations of Arthur Koestler's anti-communist works Darkness at Noon and The Yogi and the Commissar. In 1947, Trumbo, along with nine other writers and directors, was called before the House Un-American Activities Committee as an unfriendly witness to testify on the presence of communist influence in Hollywood. Trumbo refused to give information. After conviction for contempt of Congress, he was blacklisted, and in 1950, spent 11 months in prison in the federal penitentiary in Ashland, Kentucky. After Trumbo was blacklisted, some Hollywood actors and directors, such as Elia Kazan and Clifford Odets, agreed to testify and to provide names of fellow communist party members to Congress. Many of those who testified were immediately ostracized and shunned by their former friends and associates. However, Trumbo always maintained that those who testified under pressure from HUAC and the studios were equally victims of the Red Scare, an opinion for which he was criticized. After he completed his sentence, Trumbo and his family moved to Mexico with Hugo Butler and his wife Jean Rouverol, who had also been blacklisted. There, Trumbo wrote thirty scripts under pseudonyms, such as the co-written Gun Crazy (1950) (Millard Kaufman acted as a "front" for Trumbo). He won an Oscar for The Brave One (1956), written under the name Robert Rich. With the support of Otto Preminger, he received credit for the 1960 film Exodus. Shortly thereafter, Kirk Douglas made public Trumbo's credit for the screenplay for Spartacus. This was the beginning of the end of the blacklist. Trumbo was reinstated in the Writers Guild of America, West, and was credited on all subsequent scripts. In 1971, Trumbo directed the film adaptation of Johnny Got His Gun, which starred Timothy Bottoms, Diane Varsi and Jason Robards. One of his last films, Executive Action, was based on various conspiracy theories about the Kennedy assassination. His account and analysis of the Smith Act trials is entitled The Devil in the Book. In 1993, Trumbo was awarded the Academy Award posthumously for writing Roman Holiday (1953). The screen credit and award were previously given to Ian McLellan Hunter, who had been a "front" for Trumbo. He died on September 10, 1976 from a heart attack in Los Angeles. He was 70 years old. Trumbo had three children: one son, filmmaker Christopher; and two daughters, photographer Melissa, known as Mitzi, and psychotherapist Nikola. Mitzi once had a relationship with actor/comedian Steve Martin; Martin later confessed that, at that time in his "tunnel-visioned life," he had never heard of her father. In his memoir, Born Standing Up, Martin credits his time spent with the Trumbo family as having aroused his interest in politics and art. - en:wikipedia 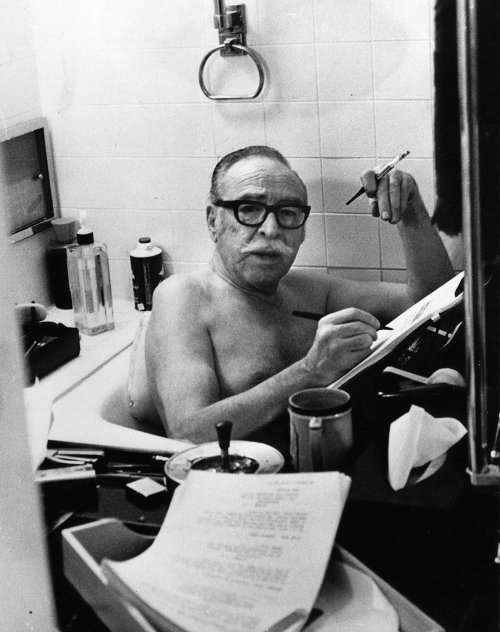 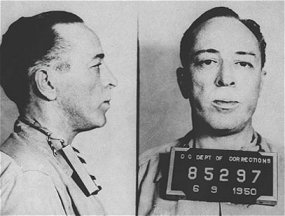 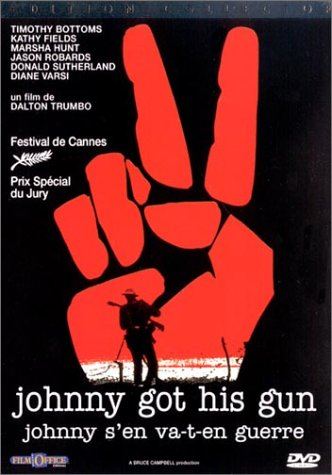 And then suddenly he saw. He had a vision of himself as a new kind of Christ as a man who carries within himself all the seeds of a new order of things. He was the new messiah of the battlefields saying to people as I am so shall you be. For he had seen the future he had tasted it and now he was living it. He had seen the airplanes flying in the sky he had seen the skies of the future filled with them black with them and now he saw the horror beneath. He saw a world of lovers forever parted of dreams never consummated of plans that never turned into reality. He saw a world of dead fathers and crippled brothers and crazy screaming sons. He saw a world of armless mothers clasping headless babies to their breasts trying to scream out their grief from throats that were cancerous with gas. He saw starved cities black and cold and motionless and the only things in this whole dead terrible world that made a move or a sound were the airplanes that blackened the sky and far off against the horizon the thunder of the big guns and the puffs that rose from barren tortured earth when their shells exploded.

That was it he had it he understood it now he had told them his secret and in denying him they had told him theirs.

We are men of peace we are men who work and we want no quarrel. But if you destroy our peace if you take away our work if you try to range us one against the other we will know what to do. If you tell us to make the world safe for democracy we will take you seriously and by god and by Christ we will make it so. We will use the guns you force upon us we will use them to defend our very lives and the menace to our lives does not lie on the other side of a nomansland that was set apart without our consent it lies within our own boundaries here and now we have seen it and we know it.

a) senza immagine / without image 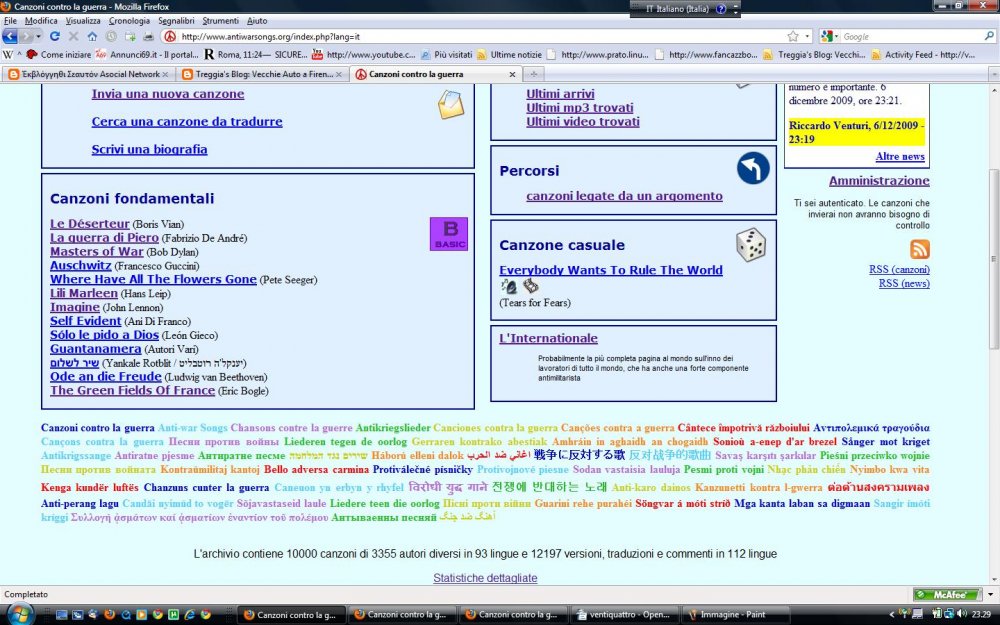 b) con immagine / with image 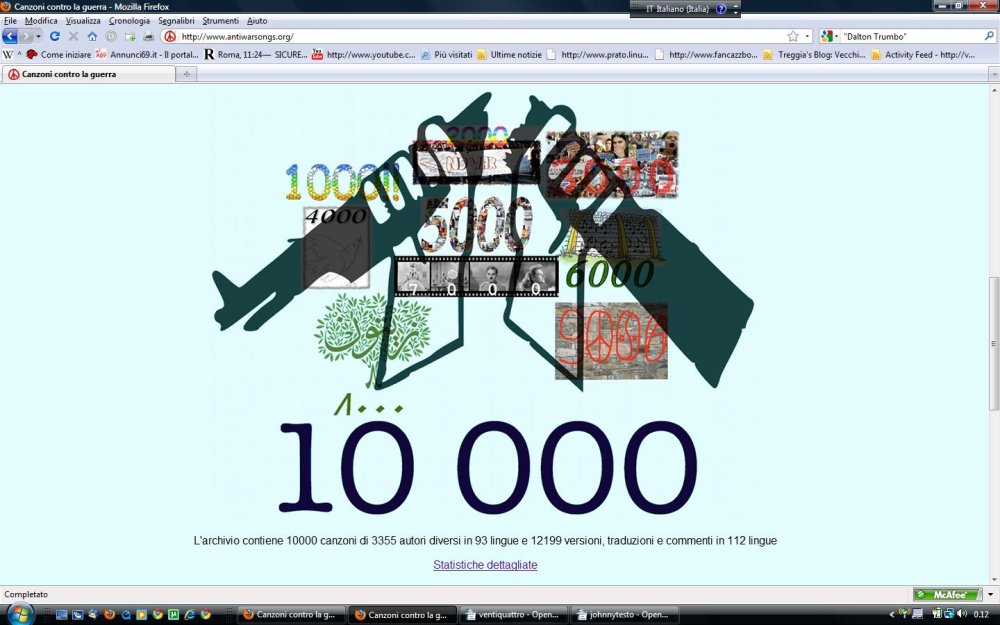 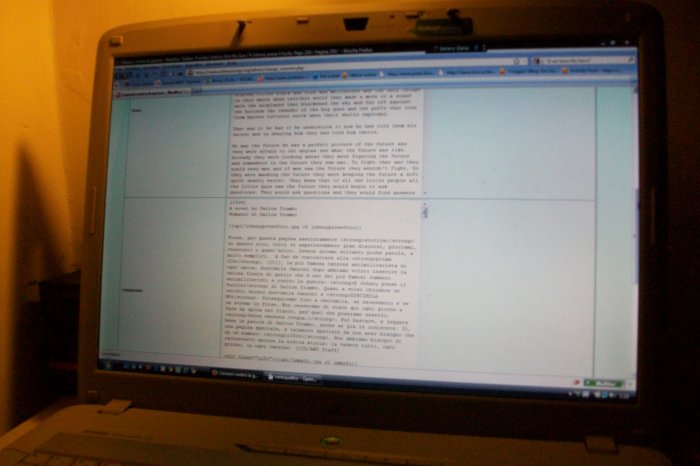