"Boy Blue" is a song written by Jeff Lynne and performed by the Electric Light Orchestra which first appeared as track number 3 from their 1974 album, Eldorado. 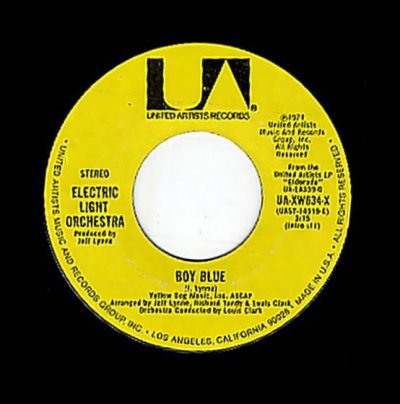 The album version of the song starts with a Medieval styled brass fanfare and then develops in to a minimoog sequence before the song proper starts. The song includes a midway solo of the bands three string players. At the end of the song the string instruments fade out into "Laredo Tornado."

Bassist Mike de Albuquerque featured on the song but it is unknown just how many tracks he contributed to on the album, as he left the band during the recording sessions.

"Mike de Albuquerque left the group after the recording session of Eldorado, on which his mighty voice could be heard for the last time on an E.L.O. record in the sixth verse of Boy Blue." Patrik Guttenbacher, Marc Haines, & Alexander von Petersdorff (1996 Unexpected Messages).

"A song about an all-conquering hero from the middle ages." Jeff Lynne (2001 - Eldorado Remaster).

The song is an anti-war song set during the Crusades and forms the second dream as part of the overall Eldorado dreamscape. It tells a story about a hero returning from a far off war and the rapturous welcome he received from his town folk. The Character of the song rebuffs the hero worship and declares his hatred of war and stating his refusal to ever take up arms again.

The song was covered by the tribute and compilation album Lynne Me Your Ears by Rick Altizer. The USA edited single version of this song is missing the fanfare intro, parts of the orchestral bridge, and the 2nd to last chorus. The song was released as the second single from the Eldorado album but failed to chart.
Hey boy blue, can't you hear all the noise, it's for you.
All the town's waiting there, let us go.
There's a show like you ain't seen before.
Welcome home, where you been all these years, look around.
All the crowd is in tears,
It's so good to see you in the streets of your town

I've seen bold knights, dropping down like flies,
I've seen kings rolling in the mire,
I've seen God point the finger of doom to our foes.
I have fought in the holiest wars,
I have smashed some of the holiest jaws.
I've been jailed, been impaled, and been dragged through the world.
One thing I have learned through these years,
Is that no man should be stricken with fear.
It should be that he walks with no care in the world.
So my friends, who are gathered today,
Hear this clear, for I'll not further say.
That no man shall cause me to take up arms again.