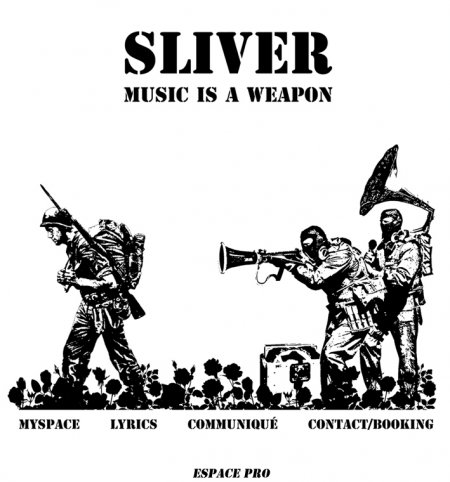 “To resist is to create. To create is to resist.” It’s now been 9 years since SLIVER started rocking on Belgian, French, German and Luxemburger scenes ; with always the same idea : using art and creation as resistance, music as a weapon. “Their riot scream floating like a flag,” SLIVER continue to sing their ideas with rockin’ hardcore as a soundtrack (and also in paper “communiqués” distributed for free at gigs and elsewhere). The band has played more than 100 shows in Europe since 1999 (with Feverish, Death Before Disco, Guerilla Poubelle...) and has released 6 self-produced records and now works with the Belgian label we are all liars records (distribution: Bang!) which released their latest EP: “Kamikaze” (reviewed in Rock Sound, Rock One, Abus Dangereux, Shoot me Again, Metalorgie…). As for the texts and ideas of the band, they even crossed the Atlantic Ocean and were noticed by the American writer Chuck Palahniuk (author of Fight Club : “I’ve enjoyed kamikaze, especially the lyrics”) and by various associations such as the one responsible for the Antiwar Songs website. SLIVER are often compared to so-called committed bands such as Refused or hellisforheroes – two bands they had the chance to work with, on a fanzine and on a remix – and to bands whose attitude is more artistic than profit-driven (At the Drive-In, Thursday) and our influences come from literature (Chuck Palahniuk, Bret Easton Ellis, Murakami Ryu, Douglas Coupland), art (Banksy, XXX Prod, Eduardo Recife, Harmony Korine, Larry Clark), and essayists (Michel Onfray, Ruwen Ogien, William Morris, Arnaud Michniak, Peter Watkins). See Here.

from stranger to stranger tell me now
this distance, how much does it cost?