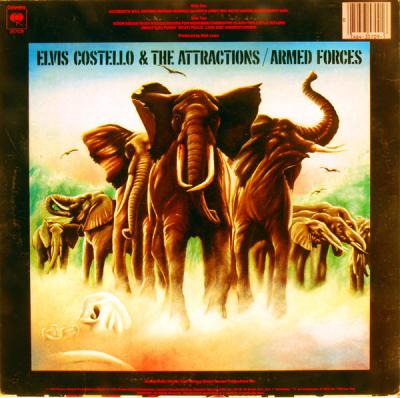 Written after the author visited Belfast in Northern Ireland, it criticises the British Army for targeting disadvantaged young men leaving secondary school (when the song was written in the late 1970s, Britain had a high unemployment rate). The title refers to Oliver Cromwell, who as Protector of the Commonwealth created the New Model Army, an earlier version of the modern British Army. The song also mentions specific "trouble spots" in the world, such as South Africa (at the time experiencing turmoil over Apartheid), Palestine, Cyprus, and most prominently Northern Ireland. In reference to the latter country, Costello included the controversial lyric "Only takes one itchy trigger/One more widow, one less white nigger", referring to the Irish, as they have historically been oppressed by the English, much as black people have been oppressed in many countries. Costello is himself of Irish descent.

The Oliver's Army single (with a b-side of Costello performing My Funny Valentine solo) peaked at #2 on the UK charts. It was recorded at Eden Studios in West London.

During the recording of Armed Forces, the incomplete Oliver's Army was nearly dropped from the album, but was eventually kept after keyboardist Steve Nieve created a piano part for the song that was reminiscent of Dancing Queen by ABBA.

en:wikipedia
Don't start me talking
I could talk all night
My mind goes sleepwalking
While I'm putting the world to right

Called careers information
Have you got yourself an occupation?

Only takes one itchy trigger
One more widow, one less white nigger

But there's no danger
It's a professional career
Though it could be arranged
With just a word in Mr. Churchill's ear