>>> I think it refers to secret operations conducted by the CIA in...

>>> There's a verse missing when he says but what we really did like... 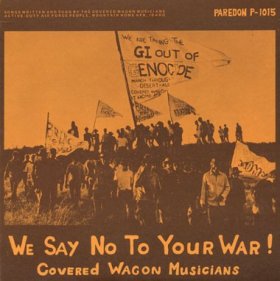 A group of Air Force and Army GIs assigned to the 1st Air Cavalry sat down one night in a hootch in Vietnam to write these words. Each person made a verse about an incident in which he had taken part, and the poem expresses their collective bitterness toward the military that had turned them into murderers. They agreed they would not rest until somehow it was published.

One man, Sgt. Mike Elliot, returned from Vietnam to the Mountain Home Air Force Base, and the poem was published in Volume 1, Number 1 of the Covered Wagon Newspaper, Helping Hand. It has been reprinted in scores of GI newspapers all over the world, probably the most widely quoted poem to come from the GI movement.

Sergeant John Boychuk, who recites it here, is a veteran of Air Force activity in Vietnam. After joining the Wagon, John arranged for a three-week leave so that he could meet with his former "enemies" in Paris. He spent a week in conference with veterans of the war from Cambodia, Laos, the National Liberation Front of South Vietnam, and North Vietnam. He is possibly the only active-duty GI to ever do so.
We shoot the sick, the young, the lame,
We do our best to kill in nam
Because the kills all count the same,
Napalm sticks to kids.

Flying low across the trees,
Pilots doing what they please,
Dropping frags on refugees,
Napalm sticks to kids.

Children sucking on a mothers tit
Gooks down in a .50 pit
Dow Chemical doesn't give a shit
Napalm sticks to kids

I've been around, Some things I've seen
But the people who are mighty mean
The gooks you kill, they make you clean
Napalm sticks to kids

I've only seen it twice
But both times, it was mighty nice
Shooting peasants planting rice
Napalm sticks to kids

Napalm,son, is lots of fun
Dropped from a bomb or shot from a gun
It gets the gooks when they're on the run
Napalm sticks to kids

Gooks in the open, making hay
I can almost hear those gunships say
"They'll be no Chieu Hois today"
Napalm sticks to kids

Shoot some civilians where the sit
Take some pictures as you split
All your life, you'll remember it
Napalm sticks to kids

May anybody explain to me this lyric : "CIA with guns for" ? What does it means ? Why the CIA ?

I think it refers to secret operations conducted by the CIA in Vietnam before 1964, like Operation 34A
In addition, the weapons supply to anticommunist fighters as Hmongs and Montagnards was a common policy for the CIA in those years.