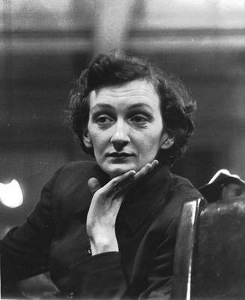 Anne McCarty Braden (July 28, 1924-March 6, 2006) was an American advocate of racial equality. Born in Louisville, Kentucky, and raised in rigidly-segregated Anniston, Alabama, Braden grew up in a middle class family that accepted southern racial mores whole-heartedly. A devout Episcopalian, Braden was bothered by racial segregation, but never questioned it until her college years at Randolph-Macon Woman’s College in Virginia. After working on newspapers in Anniston and Birmingham, she returned to Kentucky as a young adult to write for the Louisville Times. There, she met and in 1948 married fellow newspaperman Carl Braden, a left-wing trade unionist. She became a supporter of the civil rights movement at a time when it was unpopular among southern whites.

In 1948, Anne and Carl Braden immersed themselves in Henry Wallace's run on the Progressive Party for the presidency. Soon after Wallace’s defeat, they left mainstream journalism to apply their writing talents to the interracial left wing of the labor movement through the FE (Farm and Equipment Workers) Union, representing Louisville’s International Harvester employees.

Even as the postwar labor movement splintered and grew less militant, civil rights causes heated up. In 1950, Anne Braden spearheaded a hospital desegregation drive in Kentucky. She endured her first arrest in 1951 when she led a delegation of southern white women organized by the Civil Rights Congress to Mississippi to protest the execution of Willie McGee, an African American man convicted of the rape of a white woman.

In 1954, the Wades, an African American family who knew the Bradens through association, approached them with a proposal that would drastically alter all lives involved. Like so many other Americans after World War II, Andrew Wade wanted to buy a house in a suburban neighborhood. Because of Jim Crow housing practices, the Wades had been unsuccessful for months in their quest to purchase a home on their own. The Bradens, who never wavered in their support for African American civil rights, agreed to purchase the home for the Wades. On May 15, 1954 Andrew Wade and his wife Charlotte spent their first night in their new home in the Louisville suburb of Shively, Kentucky. Upon discovering that blacks had moved in, white neighbors burned a cross in front of the house, shot out windows, and condemned the Bradens for buying it on the Wades’ behalf. Their fears may have been stoked in part by the timing of the move which came only two days before the U.S. Supreme Court’s landmark condemnation of school segregation in Brown v. Board of Education, Topeka, KS. Six weeks later, amid constant community tensions, the Wades’ new house was dynamited one evening while they were out.[2] While Vernon Bown (an associate of the Wades and the Bradens) was indicted for the bombing, the actual bombers were never sought nor brought to trial. McCarthyism affected the ordeal. The investigation turned from segregationist violence to the alleged Communist Party affiliations of some of those who had supported the Wades in their housing quest. Segregationists charged that these Communists had engineered the bombing to provide a cause celebre and fund-raising opportunity, but this was never proven. Nonetheless, on October 1954, Anne and Carl Braden and five other whites were charged with sedition. After a sensationalized trial, Carl Braden—the perceived ringleader—was convicted of sedition and sentenced to 15 years’ imprisonment. As Anne and the other defendants awaited a similar fate, Carl served eight months, but out on $40,000 bond when a U.S. Supreme Court decision invalidated state sedition laws because of their capricious use. All charges were dropped and the Wades moved back to Louisville.

Blacklisted from local employment, the Bradens took jobs as field organizers for the Southern Conference Educational Fund (SCEF), a small, New Orleans-based civil rights organization whose mission was to solicit white southern support for the beleaguered southern civil rights movement. In the years before southern civil rights violations made national news, the Bradens developed their own media. Both through SCEF’s monthly newspaper, The Southern Patriot, and through numerous pamphlets and press releases publicizing major civil rights campaigns. In 1958 Anne wrote The Wall Between, a memoir of their sedition case. One of the few books of its time to unpack the psychology of white southern racism from within, it was praised by human rights leaders such as Martin Luther King, Juniorand Eleanor Roosevelt, and became a runner-up for the National Book Award. Although their radical politics marginalized them among many of their own generation, the Bradens were reclaimed by young student activists of the 1960s. They were among the civil rights movement’s most dedicated white allies.

The Bradens also had three children: James, born in 1951, a 1972 Rhodes Scholar, and a 1980 graduate of Harvard Law School (where he preceded Barack Obama as editor of the Harvard Law Review), has lived and practiced law for over 25 years in San Francisco, California. Elizabeth, born in 1960, has worked as a teacher in many countries around the world, serving as of 2006 in that capacity in rural Ethiopia. Anita, born in 1953, died of a pulmonary disorder at age 11. While raising their children, the couple remained deeply involved in the civil rights cause and the subsequent social movements it prompted in the 1960s-70s.

After Carl’s death in 1975, Anne Braden remained among the nation’s most outspoken white anti-racist activists. She instigated the formation of a new regional multi-racial organization, the Southern Organizing Committee for Economic and Social Justice (SOC), which initiated battles against environmental racism. She became an instrumental voice in the Rainbow/PUSH Coalition of the 1980s and in the two Jesse Jackson presidential campaigns, as well as organizing across racial divides in the new environmental, women’s, and anti-nuclear movements that sprang up in that decade.

No longer a pariah, Anne received the American Civil Liberties Union’s first Roger Baldwin Medal of Liberty in 1990 for her contributions to civil liberties. As she aged, her activism focused more on Louisville, where she remained a leader in anti-racist drives and taught social justice history classes at local universities. Anne Braden died on March 6, 2006. Over her nearly six decades of activism, her life touched almost every modern U.S. social movement, and her message to them all was the centrality of racism and the responsibility of whites to combat it.

The indie/hip hop group Flobots paid tribute with the song "Anne Braden" on their 2008 album Fight With Tools. The track includes several audio samples of Anne Braden, describing her life and thoughts on race in her own words.
From the color of the faces in sunday's songs
To the hatred they raised all the youngsters on
Once upon a time in this country long ago
She knew there was something wrong
Because the song said yellow, red, black, and white
Everyone precious in the path of christ
But what about the daughter of the woman cleaning their house
Wasnt she a child they were singing about
And if jesus loves us black or white skin
Why didn't her white mother invite them in?
When did it become a room for no blacks to step in?
How did she already know not to ask the question
Left lasting impressions
Adolescence's comforts gone
She never thought things would ever change
But she always knew there was something wrong

She always knew there was something wrong

Years later she found herself mississippi-bound
To help stop the legalized lynching
Of mr. willie mcgee
But they couldnt stop it
So they thought that theyd talk to the governor
About what happened
And say were tired of being used
As an excuse to kill black men
But the cops wouldnt let em past and
These women they struck em as uppity
So they hauled em all off to jail
And they called it protective custody
Then from her cell she heard her jailers
Grumbling about outsiders
And when she called him out
And said she was from the south they shouted
Why is a nice southern lady
Making trouble for the governor?
She said, i guess im not your type of lady
And i guess im not your type of southerner.
But before you call me traitor
Well its plainest just to say
I was a child in mississippi
But im ashamed of it today