My Name Is Lisa Kalvelage 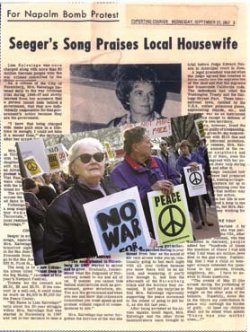 The Cupertino Courier
"This story was in a newspaper clipping sent to me from San Jose, California. In 1965, during the Vietnam War, Lisa Kalvelage and two other women, dressed in their Sunday best, stopped a shipment of napalm by standing on a loading platform, refusing to budge. She told this story to a newspaper reporter in court after being arrested." (Pete Seeger)

Been listening to the double CD album "Where Have All The Flowers Gone - The Songs of Pete Seeger" (Appleseed, 1998), songs written by or associated with Pete Seeger and sung by a wide variety of artists. It begins with the title track sung by Tommy Sands with Dolores Keane and Vedran Smailovic - a brilliant version a number of you locally and elsewhere may be familiar with. It's all a collection of songs from one of the twentieth century's best English-language singer songwriters. Obviously with a collection like this you'll like some more than others as there are a wide variety of styles within a broadly folk idiom, apart from the variety of content in the lyrics.

But there is one song I wanted to talk about here - 'My name is Lisa Kalvelage', a very powerful song from the time of the Vietnam war, performed by Ani Difranco, and based on events from 1965. Lisa Kalvelage speaks in the song, as she did in court at the time, about an action which she and two other women took in blocking a shipment of napalm going to Vietnam to horrifically burn the people there. She had been born in Nuremberg (Germany, as in Trials) and was a girl, 'at most a teenager in the years Hitler ruled our state'.

As a potential G.I. bride sometime after the war, she was interviewed by a US consular official before being permitted to join her potential husband in the States. Initially she was refused permission to emigrate because the official wasn't convinced that she had learnt her lessons about responsibility for the things which had been done by the Nazi state. Eventually she was allowed to go to the US. But all this had forced her to think, and to accept responsibility. In the States she was frequently asked about her involvement in Nazi era Germany, and where were her mother and father at the time. Being accused of mass guilt once was enough in one lifetime, when there were crimes that she could see and know, so she took action. She couldn't take it a second time, which is why she ended up in the dock. Her children would not need to be silent when asked "Where was your mother when......"

This is all a very powerful statement and a reminder that liberators can become oppressors and, at a personal level, the power of human responses to violence.

Lisa Kalvelage herself is now elderly and lives in California [ she died in 2009 ]. Although I like the song very much, some of the words/lyrics are difficult to get in Ani Difranco's version but they are available in writing if you do a web search.

Billy King, Cybercolumnist, from INNATE
My name is Lisa Kalvelage, I was born in Nuremberg
And when the trials were held there nineteen years ago
It seemed to me ridiculous to hold a nation all to blame
For the horrors that the world did undergo
A short while later when I applied to be a G. I. bride
An American consular official questioned me
He refused my exit permit, said my answers did not show
I'd learned my lesson about responsibility.

Thus suddenly I was forced to start thinking on this theme
And when later I was permitted to emigrate
I must have been asked a hundred times where I was and what I did
In those years when Hitler ruled our state
I said I was a child or at most a teen-ager
But that only extended the questioning
They'd ask, where were my parents, my father, my mother
And to this I could answer not a thing.

The seed planted there at Nuremberg in 1947
Started to sprout and to grow
Gradually I understood what that verdict meant to me
When there are crimes that I can see and I can know
And now I also know what it is to be charged with mass guilt
Once in a lifetime is enough for me
No, I could not take it for a second time
And that is why I am here today.

The events of May 25th, the day of our protest,
Put a small balance weight on the other side
Hopefully, someday my contribution to peace
Will help just a bit to turn the tide
And perhaps I can tell my children six
And later on their own children
That at least in the future they need not be silent
When they are asked, Where was your mother, when? 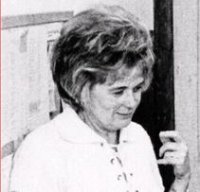 Long-time peace activist Lisa Kalvelage passed away on March 8 [2009]. She was active at the San Jose Peace Center and in Women's International League for Peace & Freedom for many years. In 1966, along with three other WILPF members, Lisa engaged in an act of civil disobedience against the Vietnam War which was commemorated in a song by Pete Seeger.