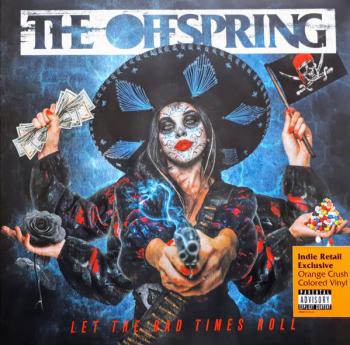 By this point in the playlist of Let the Bad Times Roll, listeners should know that The Offspring is a conscious band, i.e. one who is mindful of the prevailing issues of the day. And when it comes to regularly producing bad news, few regions are as consistent as the Middle East. This is something which caught Dexter Holland’s notice, particularly when it comes to the actions of the infamous ISIS. And that is the matter he is dealing with on “Hassan Chop”.

Those familiar with the titular term would know that it actually comes from an old Bugs Bunny cartoon. It is the catchphrase of a character named Hassan, which he utilizes whenever he sets about trying to cut a thief (i.e. Daffy Duck) to bits. And as the name of the character implies, this particular episode, entitled Ali Baby Bunny (1957), is set in the Middle East.

But of course what’s actually going down in real life is no laughing matter. The character Hassan is quite zealous when it comes to swinging his sword. And basically what The Offspring is saying is something like ISIS being the same way.

But there’s a lot of other stuff going on in this song – more than we can fully expound on here. But the bottom line is this. The Offspring seem convinced that so long as one party believes their god is superior to another, or if one actually believes God Himself is on their side, there will always be situations like this.

The root of the problem in the Middle East is a religious-superiority complex, if you will. Or at least that is how they perceive the situation, as all of these beheadings and conflicts and what have you having some sort of conflicting-religious foundation. In other words, one side always feels as if what they are doing is right and uses that as the justification to attack another.

The Offspring attribute the constant bloodshed in the Middle East to one single thing. And the said thing is a religious-superiority complex some parties operate under.
Hassan chop!

Shit hits the fan when Apache meets the Blade
Caliphate destruction it's a war that must be waged
Heads are gonna roll when the tire treads stop
These crimes they will be paid for, said Hassan chop

Swords gleam in the desert, the snipers are in line
Corsairs in the crosshairs, they gladly give their lives
Innocents are scattered like Bedouin in the sand
In this fight for God in a God forsaken land

Possession of the sword, well it passes down the line
From dictator to liberator to freedom fighter fine
The game is always changing, the result is still the same
Because our God is righteous and yours the one to blame

Killing so others will be saved
The real God he favors us today
This suffering, will it ever stop?
As long as the breath of Hassan chop