Darfur: The Song Of Adam 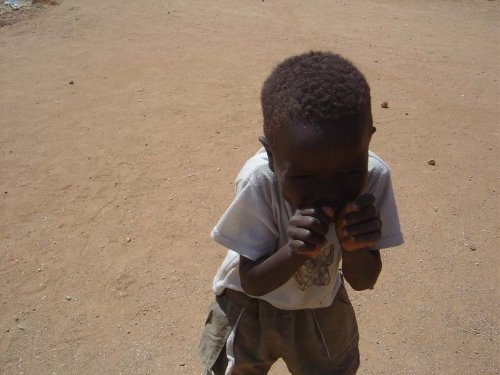 Caroline Gale, who was MSF's medical team leader until recently in Muhajariya, Sudan, remebers meeting a shy boy named Adam at a health education workshop given by the outreach workers at one of the camps outside the town.

"He had asked to be able to stand up in front of the thousand-strong crowd and sing. At the time I had no idea what the lyrics meant but the way he sang went straight to my heart. His voice was strong and did not waver, but tears rolled down his cheeks as he was singing. After the song he sat with his head in his hands, ignoring the applause.
Adam sought refuge in Muhajariya after the fighting in Darfur began.
He is 12 years old. So much of his conscious memory is tainted by war. His sombre and shy appearance is really a cover for an understanding and strength of character well beyond his years. His schooling has been erratic because of the conflict. All of the people I have met value education and are hungry to learn.
When I read the translated lyrics, the impact of Adam's song was even more powerful. I liked the song because it shows there is suffering in Darfur but not necessarily helplessness. But since the time I listened to Adam during the workshop, the conflict has come to Muhajariya again.
Armed men burned 200 houses near the town market and forcibly removed displaced people from the town. Then others in the camps near the town started to move in search of security. Among them are Adam and his family, who have been forced to flee once again further south."